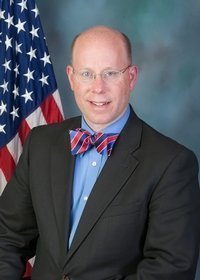 Rep. Paul Schemel (R-Franklin) is an attorney, so it makes perfect sense for him to be involved in crafting legislation that impacts the judicial system in Pennsylvania. In fact, he has indeed authored a measure that would change the way certain judges are selected, from the current process of being elected to instead being chosen on merit.

“Pennsylvania does something unusual, in that we elect all our judges– all the way up to the Supreme Court,” Schemel told me on a recent visit to his Capitol office. “Most states don’t do that. They have something more similar to the federal system, maybe they elect local judges, but they have an appointment system for the Supreme Court and the higher courts.”

Schemel’s proposal is in the form of a resolution that would call for a voter referendum on whether or not they want an appointment system.  He says there are two main benefits to a merit-based system. For one, it tends to attract more quality candidates.

But he says even more critical than that is the capability of merit-based selection to strip out a lot of the politics that are involved.  It would eliminate the money that is being dumped into a judge’s campaign which may later be parlayed into influence.

“I had an individual contact me and say ‘Paul, who are these people running and who do you recommend?’” Schemel  told me about a call he had received in a past election. “Okay, I get calls like that a lot, but the person who was asking the question was himself a judge.”

It made Schemel realize that even if judges don’t know much about their colleagues, how would the voters?  He figured there had to be a better way.

I also talked with Rep. Schemel about the current debate over telemedicine and whether it can be used for abortion. The PA Catholic Conference thinks telemedicine would be very beneficial in Pennsylvania, especially for very rural areas. But we do not want to see it used for abortions. Schemel feels much the same way.

“Telemedicine is fantastic technology and it really provides access in especially rural areas to specialist doctors that a smaller hospital simply will never have,” he said. “But there are problems with it, and part of it is our Abortion Control Act in Pennsylvania, which requires you to have an advance meeting with the doctor who is going to perform that abortion.

“As a pro-life individual, one of the reasons we really want to keep that in place is that a lot of women who have that initial consultation and then later they think about this a little more. They think about the life they have inside of them and they think ‘I don’t think I want to go through with that abortion.’ So it provides a little bit of time for reflection so a woman does not go into an abortion clinic and get an abortion the same day.”

Schemel says the concern is that telemedicine can be used as a tool for doctors to have the initial consultation.

“So now a woman maybe calls up an abortion clinic to schedule her abortion and while she is on the phone call she has that initial consultation with the doctor over the phone. We don’t believe that provides the opportunity for reflection.”

He points out that the House passed the version of telemedicine that will prevent its use for abortion.  He hopes the Senate passes that version.