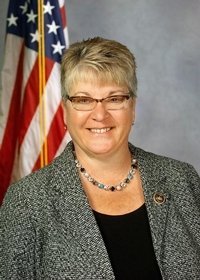 Rep. Pam Snyder (R-Fayette, Greene, Washington) has a district that is tucked away somewhere between Pittsburgh and West Virginia. It’s the largest district in the state in terms of square miles, which means it’s very rural. You’re not going to drop in on Rep. Snyder’s district office in Carmichaels on the way to anywhere else. Unless you’re lost.

But if you like beautiful countryside and a relaxing ride that provides therapy to the debilitating strain of the rat race, this is the place to go.

“My district is beautiful. You are right,” Rep. Snyder told me on a visit to her district office. “Greene Co., my portion of Fayette Co., my little piece of Washington Co., just a wonderful district. I am honored to represent the people here. I have said it for many, many years that this area is probably the best kept secret in the state of Pennsylvania because there’s no better place to raise your family. I have been born and raised here and I can’t imagine living anywhere else.”

But with a rural setting comes challenges in terms of connecting with the internet. One of the challenges—maybe the biggest–that Snyder has taken on is getting her district some better access to high-speed broadband.

“It is a huge issue out here,” she said. “It’s an issue that impacts everybody, whether they realize it or not. It’s not about being able to download the latest Netflix movie. It is truly about students being able to do their homework when they get home from school if they don’t have access. It is about someone who is sick and getting access to telemedicine and maybe a specialist in another part of the country.”

And she says it is about jobs. It is hard to get a company to come to an area if they can’t connect. It’s also hard for some of the businesses that are here to do what they have to do on a daily basis.

Snyder talked about a recent visit to an event in Fayette Co. where she got to see a robotic dairy farm.  She says that technology frees up the farmer from having to be on site come milking time. But if there is no broadband connection and they have an issue with the technology, the cows may not get milked.

“I was at another event at a farm, with a huge farmer’s market on their property. That’s how they make their living. They tell me that they are the last person on that particular carrier’s line and that their credit card machine goes down on a regular basis because of their internet connection.”

Snyder has a bill to address the issue that has passed the House and is now in the Senate. She says there are so many different avenues that lawmakers are pursuing to solve the problem.

“It is an extremely critical issue and it’s not an easy issue to solve but I am committed to keeping the fight going until I am able to solve it.”

That is an effort that concerns many people in one certain issue. You solve that problem you immediately help millions across the state. But for Snyder and other legislators, helping the constituents in many cases comes one person at a time.

“The thing that really bothers me is when someone says ‘you’re off for a couple of months.’ No. No. It is a district work period is what I like to call it,” she said. “I am extremely busy when I am in my district. It is non-stop all the time, literally seven days a week. I don’t know if I’ve ever had a weekend—other than the one that I did sneak away for my family vacation. I don’t know of another weekend where I haven’t had something on my schedule Saturdays and Sundays.”

Snyder says the work that she does in Harrisburg is very important. However…

“What I do here in the district is really what impacts people’s lives and it means a lot to me. And I have a phenomenal staff. They are top-notch. Anyone that walks through this door is going to get help whether it’s a state issue or not.”