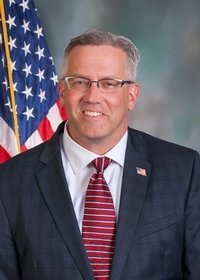 We hear and read this statement a lot in June: “legislators are busy working on getting a state budget done in time.” So how many people actually have a hand in crafting the final state budget? Apparently there aren’t a ton of chairs around the negotiating table.

“I think people would be surprised, even disappointed, to learn about how much the general members know about the particulars of the budget,” said Rep. Mike Jones (R-York). “It’s really negotiated by those at the leadership level. And there are pluses and minuses to that.”

Jones might not be busy at the budget talks but he has been busy. He’s only in his first term as a state representative but has already proven to be a friend to Catholic voters. For one thing, he has been a big proponent of the Educational Improvement Tax Credit. It has been a contentious issue at the Capitol with Democrats and Republicans generally at opposite ends of the spectrum.

“E.I.T.C. is something I’m really passionate about. My wife and I have supported a school in York—Logos Academy—for a number of years. It’s like a lot of Catholic schools. They really depend on this. It’s a great program.”

Jones talked about the $100-million increase that Republicans in the House and Senate pushed through each chamber, only to have the Governor veto it.

“You compare that to about a $6.5-billion budget that goes to public schools. We have 14% of our kids in private schools. Those are kids that the public schools don’t have to pay to educate. This is a great, great deal.”

And remember, the parents of those kids are still paying their property taxes to public schools that they don’t use. Yes, I did it too.

“We average about $1,700 a kid on the E.I.T.C. program and it’s middle and low-income,” said Jones. “That’s opposed to $17,000 for every public school student. I’m extremely disappointed that the Governor chose to veto it, but we are hopeful that it will end up in the budget.”

Jones is also a strong pro-lifer and is on board as a co-sponsor for the “heartbeat” anti-abortion bill sponsored by Rep. Stephanie Borowicz (R-Centre, Clinton).

“I can respect other people’s positions on it. I think there’s some room there for reasonable people to disagree. But my wife and I have adopted four children, so I know first-hand what the right thing to do is. It’s just something that is near and dear to my heart.”

Jones choked up for a few seconds before continuing.

‘We’ve seen things in the last year that I think are unconscionable and were unfathomable just a couple of years ago. There’s always been honest disagreement on the issue. I think you could get a lot of people to compromise. There are things you could talk about that I don’t agree with, but are reasonable.”

“But we have the Governor of Virginia talking about a nine-month old baby—newborn– that we’re going to lay them on a table, make them comfortable and wait for them to die?? We have the General Assembly of New York standing and applauding abortion on demand up to nine months. What have we become? Like I said, it’s unconscionable.”