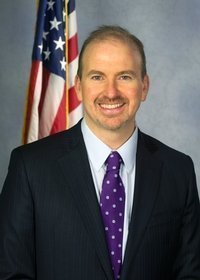 Rep. Matt Bradford (D-Montgomery) says that one afternoon he was just minding his own business practicing law when he got word that the state representative in his district was not running for re-election.

“It was 2008, the Obama year, and a lot of people were getting involved in politics for the first time,” Bradford told me on a visit to his district office just outside of Norristown. “I got asked to run. It was a Friday afternoon at the end of a month of practicing law and it just seemed like the right thing to do.”

You have to give Bradford a lot of credit. He’s basically had two jobs. Representing the people of the 70th district and being the father of four. Four young ones–14, 12, 7 and 4. That might be two jobs right there alone!

“My wife and I—we have one that just finished little league, one that’s just starting little league. Our oldest daughter just started high school…Tonight the championship baseball team has a dinner. My daughter has a football game to cheer for. I can’t remember what the little guys have but it’s always something!”

Bradford is also looking at a busy schedule in Harrisburg as the session gets in full swing. He is promising to resume work on increasing the minimum wage.

“I was blessed by my caucus to be elected Appropriations Chair for the Democrats,” he said. “So I spent an inordinate amount of my time on budget and finance issues. Obviously we would love to see a minimum wage increase. There are a lot of people who struggle to make ends meet on $7.25 an hour. And a lot of us think it’s frankly past time to get something done. It’s going to take up a lot of our time this fall. God willing that we get that done for the working people here in Pennsylvania.”

Bradford said the Governor did not tie the minimum wage increase to the budget, hoping to gain some good will.  Bradford says he was probably wise to do that, but when something is not tied to a deadline the legislature many times does not act on it.

I also had to ask him about property tax reform. It’s another one of those issues that comes up very often but is an extremely difficult fix. Bradford says he hears about it all the time.

“It gets worse frankly in southeastern districts,” Bradford said. His district is in the southeast. “Berks County you hear a ton of it. You hear it here in Montgomery County, East Norriton, Norristown. People pay very high property taxes here in my legislative district.

“And the thing that legislators miss the mark on, and one thing I try to be very upfront with, to eliminate property taxes, the $13-billion that it brings in, means finding $13-billion to fund the schools. You have to find the off-setting taxes.”

I mentioned the plan that Rep. Frank Ryan had introduced a couple of weeks before that, which would include taxing some of the retirement income of seniors. Many folks lashed out at Ryan for the idea.

“We don’t see eye to eye on necessarily every issue, but Frank is just a really good man, a decent man, one of my favorite members of the legislature. I always thought it took a Marine to throw that idea out there to take the incoming that was coming his way!

“I give him credit for touching the third rail. I don’t agree with touching that third rail, but I think it shows it shows the complexity and the difficulty of doing something like that.”

Bradford thanked us for coming to his office. I thanked him profusely for having us as well, since many times Democrats are hesitant to meet with us, presumably because of differences on major issues like abortion. (Actually, there are a number of Republicans who also have not taken advantage of the lovely opportunity to meet with me and record an interview.)

“A lot of us are really glad to see that you guys are engaging with legislators, not just on the hot-button and sometimes difficult issues, but talk about people on a personal level and getting to realize that sometimes we may disagree on individual issues but what unites us is much larger and much more important frankly.”