Rep. Mary Jo Daley All About Helping People Whether it’s Borough Council or the State Legislature 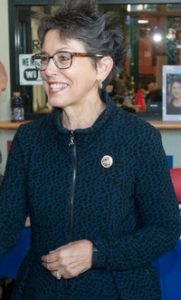 For all the times you hear about and see a state legislator discussing a bill on the House or Senate floor, or talking about a certain issue for the media, a lot of their efforts involve one-on-one work with constituents. That includes them and their staff members in trying to help people on a variety of issues.

“We helped a guy get a copy of his birth certificate and it was incredibly difficult,” said Rep. Mary Jo Daley (D-Montgomery) during a visit I made to her Capitol office. “He was born out of wedlock. He was never baptized. It turned out that his birth certificate was under his father’s name, which he never used.”

Daley and her staffers ended up enlisting the help of a social worker at one of the senior centers to eventually figure it out. It wasn’t exactly pushing a bill through on the House floor, but it was making a big difference in someone’s life. In this case, it helped the man get his benefits. Many lawmakers will tell you, it’s that kind of work that makes the work they do worthwhile.

“It was really great, because he started to get benefits,” Daley said. “And that really helped somebody.”

There are other requests for help that come along that are not quite as involved, but are still important to the person who is in need. That person may have nowhere else to go for help. It might be helping someone fill out a tax form or a form to get their driver’s license.

“Sometimes we just have to tell them it’s a local issue and this is who you have to call,” Daley said. “We always tell people, if you’re not really sure, call us and we’ll help you to figure it out.”

Daley grew up in Narberth, Montgomery County, a little borough just outside of Philadelphia. The borough is in her district. Her mom and dad were both Democrats, in a town that was heavily Republican. She first ran for office in 1991 for Narberth Borough Council.

“I was tired of Republicans always just talking about how this town was what it was just because of generations of Republican leadership,” Daley said. “I thought, okay, that’s true, but my parents were part of making this a good place to live and they’re Democrats. Democrats were somewhat ignored, so I feel like I have tried to stand up for people who need somebody to stand up for them.”

Daley served for 20 years on Narberth Borough Council before running for and winning election to her current seat in November of 2012. She took office the following January.

“I think it’s important that we pass bills like this that address issues of hate because it seems more rampant these days than it has in the past,” Daley said. “I like to go back to my father’s parents, who both came to this country for opportunity and to raise their families and lived here. That’s really important and I’d like to think of the United States as a place where people feel comfortable to come.”