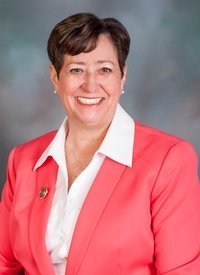 With hundreds of members in the PA House of Representatives, there is a big emphasis on leadership in Harrisburg.  One of the leaders on the Republican side is Rep. Marcy Toepel (R-Montgomery), who has been re-elected as the Majority Caucus Chairman.

“Every bill is caucused before we go to the floor to vote on it,” Toepel told me in her Harleysville district office. “I bring in the research staff. We go through each bill. I’m basically like the teacher in front of the class…We can see if there are issues with the bill, go over amendments so that when we go up to the floor we kind of know what we’re doing.”

That’s when the Whip may decide to get involved and “whip” up the votes that might be needed for passage. To my knowledge there is not actually any whip involved or any kind of physical punishment for those who don’t vote along with the party.

“It’s so that we’re functioning as a team pretty much and we know where people are, if there are any problems with the bill,” Toepel said. “I also have a staff that helps track bills, through committee and the amendment process. We send out many, many emails to the members, keeping them informed of the movement of bills from introduction, to committee hearing, to being scheduled to vote. We work closely with the leader’s office, who schedules all the bills for voting.”

I think that sounds complicated. Toepel says it is, but says she is lucky to have inherited a very good staff. The members worked for previous caucus chairs and seem to have a pretty good lay of the land, which is important since there about 30,000 or so bills being introduced each session.

“It is very complicated, making sure everything is communicated and organized,” she said. “Some of the leaders and the speakers, they’re more at the higher level of scheduling and working out some of the hiccups with the Senate. But we’re down in the dirt, getting a little bit dirty as far as making sure all the members know what’s going on.”

I remembered seeing Rep. Toepel at a roundtable discussion that the Pennsylvania Catholic Conference attended back in February in Bucks Co. Toepel is supporting companion bills by Rep. Seth Grove and Sen. Kristin Phillips-Hill that would strengthen penalties for those patronizing the victims of human trafficking that are forced into committing crimes. The measures are collectively known as the “Buyer Beware” Bill.

“We’re going after that person who’s purchasing that service because they’re creating victims and they’re perpetrating a crime,” Toepel said. “They know what they’re doing. It will increase penalties against them. I strongly support the “Buyer Beware” Bill.”

“I’ve always been a huge victim advocate—from increasing penalties for child pornographers to straw purchases of guns,” said Toepel, who at one point worked in the Mongtomgery Co. courthouse. She was in the Clerk of Courts office and would see many of the victims at the end of their cases.

“I would get to see some of the folks face to face. Heartbreaking stories. Certainly the most heartbreaking are the ones that involved children. Human trafficking is sort of an underground economy that is occurring everywhere. It’s in Montgomery Co. as well. Montgomery Co. has formed a task force. I’m actually a member.”

Toepel achieved much acclaim for her bill on straw purchasing of guns, which was enacted back in 2012. It restored a crucial law enforcement tool to remove illegal guns and prosecute straw purchasers. It was named after Officer Brad Fox, who was fatally shot by a gun obtained through a straw purchase.