Like many of us, PA Rep. Lee James (R-Butler, Venango) is old enough to remember the Roe V. Wade decision on abortion of 1973. He’s made some observations since then.

“For many, many years, the over-arching concern has been for women’s health. And that is an important issue,” James said. “But in my view, in that period of time, we have forgotten about the fetus and I’m very pro-fetus. I’m not anti-woman by any stretch of the imagination. I have two daughters and a wife. I just think more care needs to be taken with consideration for that fetus.”

James pointed out that last session lawmakers asked for a very small modification in Pennsylvania’s abortion law by going for a ban after 20 weeks instead of the current 24. He also noted the “heart-beat” bill, which has been started this session. He says there are modifications which can be done without endangering the mother.

“I understand the reason for rape, incest and health of the mother. I’m perfectly good with those things. I would like civilization to have more care for the fetus, which is helpless.”

I thanked James for his support for the E.I.T.C. bill which passed the House this month and passed the Senate this week. It has been a big help for Catholic schools, but James thinks the benefit goes much further than that.

“I think it’s a huge help for communities, period,” he said. “If I’m a business person and I’m very concerned about certain issues where I live, then I can steer my tax dollars and get a portion of the consideration back from the Commonwealth of Pennsylvania. If I agree to make a contribution for two years, it’s a 90% credit. So I’m still paying my taxes and in fact I’m paying a little bit more because I’m not getting 100% for what I’m paying but I’m supporting my local community and I think that’s very critical.”

This is budget time around the Capitol and there will be a lot of work being done to get it finished by the end of the month deadline. That makes for a lot of needs and ideas to be rolled up into one spending plan.

“We are a diverse state. I come from western Pennsylvania where—as a general statement– the number of high school graduates is going down,” James said. “Therefore our student population is shrinking modestly almost every year. That compares to the eastern half of the state, where I don’t live but they’re growing gangbusters, I hear, and they need more relief. I’m sensitive to that.”

James also talked about the “hold harmless” policy, which guarantees that school districts will not get their funding cut from the previous year.

“To western Pennsylvania schools, “hold harmless” means we’ll be able to open the doors tomorrow morning. If that goes away, half of schools will have to close down because we will lose between 30 and 40% of the support we get to keep our districts thriving and open to new students.” 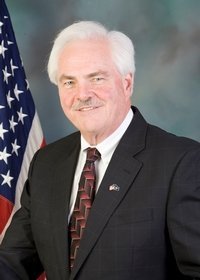