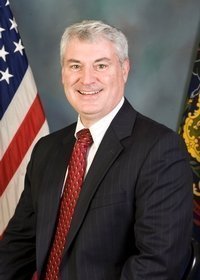 Rep. Keith Greiner (R-Lancaster) was happy with how the state budget turned out—what was spent and what was not spent.

“I thought we had a good pragmatic approach. One thing I was concerned about was making sure we had a surplus to have a significant rainy day fund,” Greiner said. As a CPA he has always made a priority of being fiscally conservative and spending taxpayer money wisely. “We funded education, which was very important, human services and those types of things, which are a huge part of the budget. But in the end we were able to have those savings too.”

Greiner says the savings are important because there will be a time when the revenue is not as high as it was this year. He wishes they could have made greater progress this past term on pension reform. But he was grateful that Thaddeus Stevens College, which has a welding division in his district, got adequate funding in the budget.

“Thaddeus Stevens just does an outstanding job,” Greiner said. “Their graduation rate is nearly 100%. Workforce development is key in the Commonwealth and we need to continue to promote that.”

Greiner says it is truly a diverse legislature in Harrisburg that does not always fall along party lines.

“I may have more in common with a Cambria Co. Democrat than maybe I do with a Chester Co. Republican,” Greiner said. “I think sometimes people look at party and it’s not always that. It can be rural and urban with the issues. The issues do vary.”

Greiner supported the increase in funding for the Education Improvement Tax Credit, which greatly benefits private schools. Republicans had been requesting $100-million, which the Governor vetoed. The final increase came in at $25-million. He sees the EITC benefitting the schools, but as a CPA he’s been touting the project at the other end as well.

“Before I became a member of the state House I encouraged businesses to participate in the EITC plan and the scholarship program because the reality is that it’s very beneficial. A lot of our kids, not only in Lancaster Co. but in Philadelphia and other areas, they attend private schools. Here in Lancaster Co. we have schools, the Water Street Rescue Mission. We have Mennonite schools and also of course our Catholic schools—Lancaster Catholic and other Catholic schools. I just think it’s a real win because not every student fits in well in the public school system.”

Democrats fought the increase in the EITC on the grounds that it took money away from public schools.

“When you look at the budget as a whole, the dollars we put in that program, it’s a significant amount but as a percentage it’s not a huge amount.”

Greiner has also signed on as a co-sponsor for the “heartbeat” bill which will be introduced by Rep. Stephanie Borowicz (R-Centre, Clinton) in the fall. He also supported the Down Syndrome Protection Act which was approved by the House this past session.

“With my background and my area here, I just think that’s critical,” Greiner said. “I will say it’s a little bit troubling and disturbing with some of the decisions that you see in New York and some of these other states. I’m a firm believer in the sanctity of life. I think science has proven that life starts very early.”

Greiner says it’s fine to compromise on the budget but not on your principles.

“Never sacrifice your values. Never sacrifice what you believe in. If someone wants to question me on a transportation vote, that’s fine. But there are certain values that if I lose an election because of it, than I lose. I think if you’re convictions are strong, you do the right thing, people can see that.”