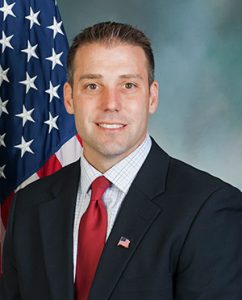 There are currently no restrictions on using public assistant, or the Electronic Benefit Transfer (EBT) cards to purchase tobacco in Pennsylvania. But a bill sponsored by Rep. Justin Walsh (R-Westmoreland) could change that. House Bill 847 would forbid the use of EBT cards to purchase tobacco or tobacco-related products. The bill is supported by the PA Catholic Conference and passed the state House in September. It is now before the Senate.

“It is my belief that that type of assistance is for necessities,” Walsh told me during a recent visit to his district office in suburban Pittsburgh. “Tobacco, in my mind, does not fall within the definition of a necessity. I believe it’s a good bill, good government. That’s taxpayer money and we need to make sure it’s being put to the correct purposes.”

The EBT cards are issued by the Department of Human Services to administer public assistance benefits.

Walsh takes the responsibility of spending the taxpayers’ money very seriously. He acknowledges the hard-working people of his district.

“People like to call it ‘public money,’” he said. “But it’s not public money. It’s your money. It’s my money. We’re required to pay our taxes and when we do we want to make sure it goes to the core functions of government.”

Walsh is also sponsoring a bill that would hold local government officials accountable in terms of their attendance at meetings. It would call for a constitutional amendment that would go to the voters in the form of a referendum if it passes the House and Senate in two consecutive sessions. It has already passed the House.

“It would require the legislature to pass a bill that would include some sort of attendance policy for local officials. We’ve had problems within my own district where elected officials just stopped attending meetings and that causes a lot of problems for the remaining elected officials who show up and choose to do the work. It’s a burden on them. If you make the commitment to run for office, then there should be some kind of recourse if you don’t show up.”

And Walsh remains staunchly pro-life, already voting for the Down Syndrome Protection Act and other bills that preserve the dignity of life. That reflects the make-up of his district which has an interesting demographic. It’s majority Democrat. Walsh is a Republican.

“There are more Democratic registrations but when I talk to my constituents I do get a lot of pro-life, pro-second amendment (right to bear arms) people.”