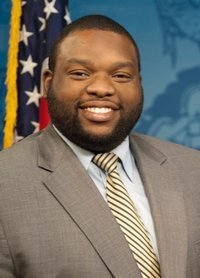 It was the first of its kind law in the nation and took effect this past June. I visited Rep. Harris in his Philadelphia district office to talk about that measure and other things that he is working on.

“Clean Slate basically says that those with misdemeanor II and III, that are of non-violent nature, after 10 years—that person’s record can be automatically sealed,” Harris said. “So that when they go to apply for a job, people won’t see it. Those with misdemeanor I have an opportunity to go to court to see if that can be sealed.”

Harris admitted that many people wouldn’t think that the two authors of the bill would have a lot in common–one a Philadelphia Democrat, the other a mid-state Republican. Yes, he said, on a lot of issues they are on opposite sides.

“But on this issue, we agree that when a person has paid their debt to society, it should be our job as government to get them back into society and we should be removing obstacles that are in their way. This is the reason why we did Clean Slate. It’s the reason why we’re also looking at fixing the issues we have with our probation system here in Pennsylvania and how we shut the door to what I call a ‘perpetual state of probation.’”

To that end, Harris joined Rep. Ed Gainey (D-Allegheny), Rep. Mike Jones (R-York) and Rep. Delozier to introduce a bill that aimed at reforming the state’s probation and parole system. House Bill 1555 is known as the Smart Probation and Parole Act and includes preventing courts from sentencing a person to consecutive sentences of probation and preventing the court from extending probation or parole due solely to nonpayment of fines and costs.

There have been criticisms here and there about such criminal justice reform signifies a softening on crime. That comes even as several Republicans and a number of law enforcement officials and prosecutors have supported such reforms.

“The reality is that you can reform a criminal justice system and be fair and just and still keep communities safe,” Harris said. “I question anybody who claims Christianity as their religious belief on why they wouldn’t have a redemptive view on life. How can anyone call themselves a Christian and not believe in the redemptive power of Christ?”

Harris did offer a reminder that this program does not apply to violent offenders who are a danger to society.

Harris has shown an eagerness to work with lawmakers, no matter what their party might be. I also thanked him for agreeing to meet with me when many Democrats have not taken advantage of such a great opportunity! (At least I think it is)

“I think Frederick Douglas said it, and I’m paraphrasing…’I will work with anyone and everyone to do good. And I will work with no one to do what is wrong.’ I kind of live my life by that model. If there are folks that are willing to work with me on an issue that will positively affect my community, then I’m going to work with them…I think that’s what our body politick is supposed to be about. It’s supposed to be about us finding consensus and getting the things done that we can do for people.”

One of the big issues that will be facing legislators this fall will be whether or not to do something with gun laws. That may be tough to find a consensus. Several Democrats have called for action after more deadly mass shootings this summer. Harris had this to say;

“If my friends—on both sides of the aisle—want to be concerned about a life starting with the first heartbeat, I want you to also protect that life when it lives in urban communities and lives under the threat of gun violence.