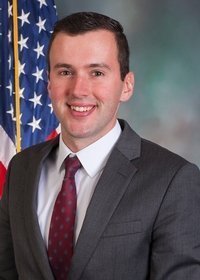 There are plenty of examples of legislators in Harrisburg that have taken jobs in public service after spending several years working in other careers. Sen. Maria Collett (D-Bucks, Montgomery) was a nurse and a lawyer.  Sen. Steve Santarsiero (D-Bucks) was a lawyer and a teacher. Rep. Frank Ryan (R-Lebanon) was a C.P.A. and served in Iraq.

Then there are those who feeling the calling much earlier in life–like as kids.

“My grandfather was actually a legislator,” said Hershey (R-Franklin, Juniata, Mifflin). “I heard very tangible stories about how he was able to help people with municipal issues, or even down to helping a lady get a skunk out from under her porch.”

I remember interviewing his grandfather—Rep. Art Hershey of Chester Co.– while I worked in local radio for WCOJ-AM.  Art Hershey was a farmer by a trade and one of the nicest men you’d ever be lucky enough to meet. He entered office in Harrisburg in 1983 and retired in 2008.

“I got to hear a lot of stories about how politics and how the public policy we work on here in Harrisburg here can impact people’s lives in a positive way,” John Hershey said.

John Hershey paid his dues along the way as well. He majored in politics at Messiah College. He interned under U.S. House Speaker John Boehner. He worked for Congressman Charlie Dent.

“It was an incredible learning experience. I would do it all over again and Congressman Dent was a great boss,” Hershey said. “He was on Appropriations so I got a chance to really see the nuts and bolts of how budgets work and how government funds things. At the same time I really love that I’m in Harrisburg now. The closer you get to the people, so to speak, the more impact your decisions have on their lives.”

He talked about working in Washington on things like defense spending as compared to working in Harrisburg to help someone get their road fixed.

“I have a lot more fun being closer to the people I serve now than when I was in Washington.”

With dairy farming in the blood lines, Hershey is a strong advocate for the group. He drew praise from Rep. Kate Klunk (R-York) this week for comments he made in the House Agriculture & Rural Affairs Committee about educating young people on what is–and what is not– milk.

“A lot of these kids today, because of some rules that came out at the federal level about fat content in milk, they might think that an almond milk alternative that might have a lot of sugars and things like that, is just as healthy as a calcium-dense, vitamin D-dense whole milk,” Hershey said.

I reached out to Hershey because I saw he had signed on as a co-sponsor for the “heartbeat” anti-abortion bill that is expected to be introduced in the fall by Rep. Stephanie Borowicz (R-Centre, Clinton).

“I ran on the issue of protecting the right to life and we recently passed the Down syndrome abortion ban,” Hershey said. “Rep. Borowicz approached me and said she would like to take things further to protect the right to life if there’s been a heartbeat detected. If a heartbeat is detected, the fetus might not be viable, but it’s pretty scientifically evident that there is a life in there. You can’t just claim it’s a clump of cells any more or something like that.”