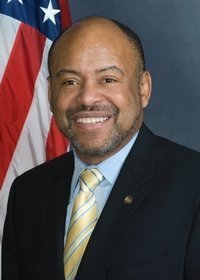 Rep. Jim Roebuck (D-Philadelphia) sees his share of visitors over the summer in his West Philadelphia district office.  The day I came to see him he was just finishing up a talk with visiting medical students from the nearby Penn campus.

“We have a fairly steady number of people come to the office for services,” he said. “We have groups that come in from time. I particularly enjoy meeting with students. I used to be a teacher. I taught at Drexel University. I’m still, at heart, a teacher. I like meeting young people and talking about issues and about career selection. Things like that.”

Roebuck thinks young people need to learn more about their chosen career before they go too far in learning about it that it’s impossible to go another route.

“You can think you know about something, but you don’t necessarily know unless you are doing it each and every day and you’re exposed to it in a way that you are in college. I think that sometimes that students change their minds and they do that more than once. I would hope that we could a better job with this. I think high school’s a key point but most students should have begun to make decisions about what they want to do in middle or junior high school.”

He says that too often these young people change their minds when it’s difficult to change course.

Roebuck is also looking to help make education more affordable…from kindergarten all the way up through college.  He says the state has fallen short in providing each school district with enough money to do what it should be doing in grades K through 12. He’s also hoping things can be done to help college students.

“We’re looking at ways to reduce the cost of college, with the goal to have free college education,” he said. “But also putting a control on the debt with students end up with. Too often students end up with a huge amount of debt that doesn’t go away and hampers them in terms of building a successful life after they finish college.”

“Pennsylvania ranks 48th, or third worst, in America at funding colleges, technical schools and universities,” Roebuck said at the time. “By under-funding our institutions we are creating a crisis for our graduates.”