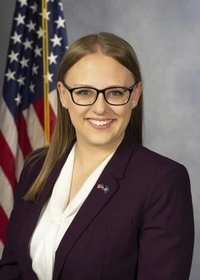 Rep. Jennifer O’Mara (R-Delaware) is a product of St. Barnabas Catholic School in Philadelphia. She attended there up until 8th grade and also was an altar server. Apparently she was a pretty good one too!

“I was an altar server at St. Barney’s,” she told me on a recent trip to her Springfield district office. “And one of my proudest moments there was when I received the “Altar Server of the Year” award when I served at the Cathedral in center city under Cardinal Bevilacqua. It was quite an experience for my family and for my school to be honored in that way.”

O’Mara grew up in Philadelphia were her father worked as a firefighter. But the course of her life would change when she was still very young.

“When I was 13 we lost my dad to gun suicide,” she said. “That changed everything for our family. It’s what brought us to Delaware County. We had to make big life adjustments. We went to public schools. My mom went from being a stay-at-home mom to having to work for the first time in 15 years.”

She said going through that experience and realizing that it is not unique, inspired her to get into public service to try to help others.

“I can help people who are facing similar struggles that my family faced and other families in Pennsylvania are facing.”

Lawmakers were on their summer recess when I stopped in to see Rep. O’Mara, but the term “recess” is a misnomer. They might be on a recess from the Capitol but they are still very busy, meeting constituents and making appearances. But as busy as O’Mara has been, she still looks back at the time she was campaigning as being even more hectic. Then she had to work full-time and campaign—not an easy thing to do! But she says it was good practice for when she took office in January.

“We were in Harrisburg a lot for the first six months of the year,” she said. “So going back and forth was a big adjustment. But being back in the district has been wonderful. We’ve had tons of events. I’ve had four town halls, plus there are the senior fairs and events about the Spotted Lantern Fly.”

All in all, she seems to be very pleased at how things have gone.

“It’s rewarding. It’s a lot more rewarding than I imagined it would be.  Everyone always says ‘you’re not going to get anything done, you’re going into politics.’ I don’t look at it like that. I went into public service. Here in the district is where we really see our work pay off. And we can really help people. Sometimes it’s in the smallest of ways. Someone lost their handicap plaque and they need a new one. Or they lost their car registration and they’re on their way to the shore and you’re helping them out before they go on their vacation. It’s been surprising, but very rewarding for me and my staff.”

O’Mara says everyone on her staff lives in the district so it gives them a chance to give back to their community.

She is serving on the Veterans Affairs and Emergency Preparedness Committee. That was her first choice since her husband is a veteran. He served two tours of duty in Afghanistan and has two Purple Hearts.

“He was another reason I decided to run for office,” she said. “I was his advocate at the VA through his disability pension process and it took about two years. It really opened my eyes to the struggles our veterans are facing. Living with a veteran who has PTSD has enlightened me as to what families are dealing with in any mental health issue.”

One of the bills that O’Mara is working on will add Workers Comp benefits for first responders who have PTSD or PTSI. One statistic that she saw really hit home.