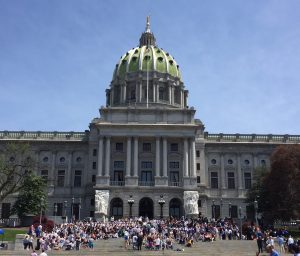 PA Rep. Seth Grove (R-York Co.) is questioning a plan by some Democrats in Harrisburg to spend
$125-million in budget surpluses.

Grove reacted to comments by Sen. Vincent Hughes’ (D-Philadelphia/Montgomery) that support spending the surplus revenue or tapping tap special fund reserve accounts to help public schools across the state.  All but $40-million of that would go to Philadelphia schools, which are in Hughes’ district.

“After being told by the Wolf administration the money in these special fund reserve accounts were committed and couldn’t be used to fill the budget gap two years ago,” Grove said. “I’m shocked to hear Sen. Hughes and his Democratic colleagues in the House and Senate now want to tap this funding stream for new spending. Especially after their opposition to Gov. Tom Wolf’s proposal to use special funds to balance next year’s budget.

“Two years ago, the administration and Democrats pushed for broad tax increases, which were thankfully staved off by House Republicans, instead of using these reserve accounts,” Grove continued.  “We must plan for the future and put the surplus away in the rainy day fund for when the economy does falter and tax revenue decreases, as well as, improve our bond rating and stabilize the general fund cash flow.

Democrats say the plan would require the school districts to use the funding for emergency repairs, including lead and asbestos remediation, HVAC repair or replacement; electrical system repair and plumbing concerns.

The follows passage two weeks ago of House Bill 800, which calls for an increase of $100-million in the Educational Improvement Tax Credit, or EITC. That’s a program which allows corporations to donate to scholarship funds which have been a huge help to private schools.

The bill was passed along party lines, with Republicans supporting the bill and Democrats vigorously opposing it. Governor Wolf is calling for over $9-Billion in his budget to go toward public schools.