Rep. Donna Bullock: Working Hard for the Community and the Planet 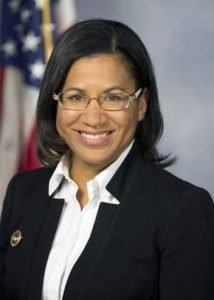 Every time I visit a legislator in their district office I see a lot of activity. The staff members are very busy, either taking calls from constituents or meeting with them in person. The lawmakers are squeezing in meetings and appearances. In fact, they are probably busier over their summer “recess” than they are during the session time at the Capitol.

“Our office is truly a one-stop shop for many of my neighbors and constituents here in the 195th,” Rep. Donna Bullock (D-Philadelphia) told me during a visit to her office. “They come to Girard Avenue to go shopping, to visit neighbors, to eat, but also to come and get help with any of their questions.”

Bullock is very big on service to the people she represents. It’s a commitment that started early in her life. She attended a soup kitchen called “Elijah’s Promise” with her family when they were in need.

“’Elijah’s Promise’ took care of me and my family when we struggled,” she said. “But it also installed in me a sense of service, because after I ate, my grandmother made me serve. As I grew up, that mission to serve, even though I had very little, has always been there.”

Bullock was also apparently driven to succeed. She earned a scholarship to college, then went to law school where she continued to excel. She also held on to her dream of trying to save the world.

“My career path took me to places like Community Legal Services and I was able to help folks. I eventually crossed paths with a council person here in Philadelphia who brought me on as a staff person. I was happy to do that, happy to be in service—whether I was a staff person or whether I was in legal services.”

The mass shootings that occurred in Texas and Ohio over the summer made for big headlines and calls for action from lawmakers on the state and federal level. But Bullock saw gun violence in her own back yard and that made her determined to take action.

Bullock is introducing companion legislation that mirrors a bill that was introduced in the city of Philadelphia to prohibit firearms at public recreation centers and playgrounds in the city.

She is also keeping an eye toward the environment with some of her other pieces of legislation.

“I’ve been a champion and an advocate of environmental justice issues and climate change—not an issue that I thought about when I started as a legislator four years ago. But it’s something that’s come to my attention through constituents and, interestingly enough, through my own children. They go to a Catholic school here in Philadelphia called Gesu and they had a project the one year about the environment and how it was a gift from God and it was their responsibility to take care of that gift.”

Bullock said her kids have always loved animals and that made a big impression on how they view our planet.

“They understood very well that what we do impacts our planet, impacts this world that God has gifted them, the animals that they love and our own future here.”

She has been working with legislators and advocates across Pennsylvania and across the country on different environmental issues and legislation that she hopes can be passed to encourage everyone to take better care of the environment.