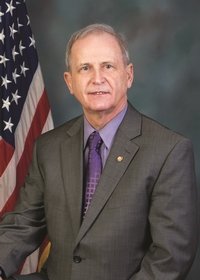 Oftentimes state legislators can feel themselves being pulled in several directions. They must stay focused on the larger issues like abortion, public and private school funding, and whether or not to raise taxes. But they also have to look out for their districts on issues that are unique to the people they represent.

Many people in the northeast have become sick of all the rain we’ve had recently, but you can understand if the residents of Columbia Co. are especially sick of that rain. The effects of that have been made worse by long-term damage to many creeks. Rep. David Millard (R-Columbia) is focused on fixing that problem.

“Whatever happens during one (rain) event brings debris in or creates a gravel bar doesn’t ever get fixed,” Millard said. “And then the next event might be less of a downpour or concentrated rainfall but it equals the previous event because the issues have not been taken care of.”

He calls it one of the high priority issues in Columbia Co.

“Put yourself in the shoes of the property owner, who faces a flood every time there is a high water event. How many times can your home taken on water? Secondly, between events we all age. Cleaning a home out in your twenties and remodeling is one thing, doing it in your seventies is another thing.”

Millard has been working to create a coordinated effort that would bring all the agencies together on the local, county, state and federal level. He says the problem is with many townships along Fishing Creek and the gravel bars that collect over a period of time. Those bars have spawned vegetation and collected various items that can block the flow of water.

“A high-water event that can force the stream to make a new footprint,” Millard said. “If the gravel bar is in the center, the water can go to the left or the right—damaging property owners’ land and homes. I believe that removing the bars and doing some stream bank stabilization will play a very important part in reducing–even with a moderate rainfall—the frequency of these devastating events to properties.”

Millard says the answer is not to dredge the entire length of the stream. The goal is to slow water down and not increase the velocity of it.  But he says it’s important to also identify the relief points that will allow high water to fan out, possibly into a field.

He is looking to bring together the townships that are involved and apply for aid from programs on the various government levels.

“I want to bring resolve to the major flooding issues and put this thing to rest. I want to bring the county on board, which they already are, with a flood-resiliency officer, who really is the collector of all the information as one central and focal point to identify those problem areas.”