Rep. Clint Owlett Hears From Georgia Officials About How They Passed the “Heartbeat” Anti-abortion Bill 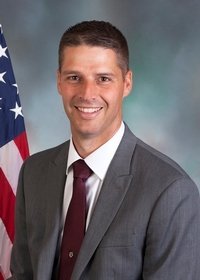 It was the first Friday of August and Wellsboro High School in Tioga Co. was packed with seniors. Not high school seniors. Senior citizens. It was Rep. Clint Owlett’s (R-Bradford, Potter, Tioga) annual Senior Expo.

“This is one of the biggest events that we do,” Owlett told me as he took a short break from talking with the visitors. “We usually expect about a thousand care-takers and seniors to come out to this event.”

They can find dozens of vendors with information and services for the seniors.

“They need a lot of information and it’s hard for them to get it,” Owlett said. “So whenever we can pull it all together in one location it’s great for them.”

Owlett probably didn’t come to the expo expecting to run into some people that he went to school with, but that’s what happened. Well, sort of. One of the seniors came up the lawmaker and told him that she used to teach him in Sunday school. Whatever that lady and the other teachers–along with his family– taught him, it definitely stuck.

“My faith is a big part of who I am. It is for my family as well. I just continue to stand up for those things. It’s important to us.”

Owlett has signed on as one of the co-sponsors for the “heartbeat” anti-abortion bill as Pennsylvania tries to follow in the footsteps of Georgia. It was back in May of this year that Georgia Gov. Brian Kemp signed one of the most restrictive abortion laws in the nation. It effectively bans abortion after six weeks of pregnancy. That’s when doctors can usually detect a heartbeat in the fetus.

Owlett said that a group from the PA state House was able to meet with officials from Georgia recently to talk about doing here what they did there.

“It was great to hear how they did it. It was such a long process, but it was so worth it. It will be challenged in the courts but any time that you can move the ball forward in some sort of an incremental step, with taking the biggest incremental step that you can towards life, it’s important. It’s exciting to be a part of the process and think through what we can do here in Pennsylvania to really move the ball forward on that issue.”

It will be interesting to see what happens on that regard in the fall. Rep. Stephanie Borowicz (R-Centre, Clinton) is the prime sponsor on the “heartbeat” bill and is expected to introduce it in September or October. For pro-lifers, it comes as welcomed news that someone like Clint Owlett will be right there with her.