Rep. Bud Cook Wants People to ‘C’mon’ to the Mon! 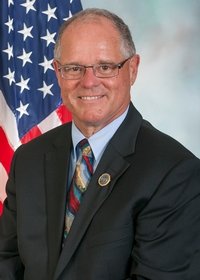 Most of what people hear about what goes on at the state Capitol involves issues that affect residents state-wide, like the budget, minimum wage, pro-life bills and the like. But legislators have to also keep an eye on something else: their district and the people they represent.

“I never want to forget who provided me with the honor and the opportunity to come out here,” said Rep. Bud Cook (R-Fayette, Washington). “I grew up in the Mon Valley, graduated from California High School.”

And for those who aren’t from these parts, “Mon” is short for Monongahela, as in Monongahela River. As in Mon Valley.

“I think it’s a very, very, very special place to be,” Cook said. “My mission in life, in addition to representing the people out here in the district is to promote the Mon Valley.”

I had told the representative that I thought I had passed his district when I went over a big bridge on Route 70. I had. I just didn’t realize it. Cook indicated that I’m not the only who has done that. He sees that as an ongoing issue.

“Where Interstate 70 intersects the Mon River, that is THE heart of the 49th District,” he continued. “You could drive by it and not even know it’s there…It’s there. We have to re-discover it, I believe, for ourselves and then market it and invite people in.”

Cook knows many of the ins and outs of his district.  For example, he says there are nine different school districts and each one has a trout stream. He says the Fish & Boat Commission has a program where you can raise fish in the classroom. It has been incorporated into a couple of classrooms in his district.

“We’re now working through the intermediate unit, one which represents Greene, Washington and Fayette Counties. What we’d like to do is get that program into all 25 schools and Intermediate Unit 1.”

He says there are 19 different sportsman clubs in his district. The top seven have a membership of 500 or more. One sportsman’s club is so exclusive, in fact, that Cook has been unable to get a membership! But he does belong to about six or seven of them.

Cook talked about how the area was hurt by the steel mills closing in the 1970’s and 80’s. But he says the area has rebounded in a big way.

“I see a very bright future with the cracker plant and what’s going on with the Marcellus Shale and all that. That expansion will continue up the Ohio. We need to get ready for it.”

One of the biggest challenges he says is jobs. There are plenty of them, it’s just a case of finding enough people to work.

“I’m hearing—whether it be from our unions, or people who have factories, small businesses—they can’t find people who want to work. We have the jobs. We need people that are willing to get off the couch, get out the door, apply and actually show up for work. That’s the number one concern I hear. Number two is passing the drug test.”