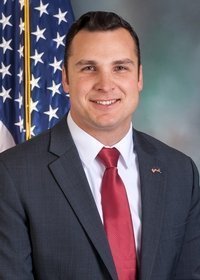 It was the changing of the guard in the 105th district in the PA House. Rep. Ron Marsico was stepping down after 30 years of service. Taking that seat would be Republican Andrew Lewis, a decorated combat veteran who was a leader in his family construction business.

“Big shoes to fill,” Lewis told me when I visited him in his Dauphin Co. district office. He talked about bills that he is backing in Harrisburg that deal with government reform.

“Reforming our government is my top priority,” he said. “We’re supposed to be a government that works for the people, not the other way around. A lot of trust has been lost in government. That’s what I’m hearing. Sometimes those in government have lost touch with those that they serve, so my goal has been to bring structural change to Harrisburg.”

Lewis’s first piece of legislation was a term-limit bill. He says he has gotten 19 co-sponsors on that and that it would revive the concept of an actual ‘citizen legislature.’ Another bill that he sponsored was an ethics reform measure that has already made it through committee. It essentially governs how a municipality can borrow funds.

“The money has to be used for the purpose that you borrowed it for,” Lewis explained. “You can’t divert the money to a secret slush fund somewhere. You’d be shocked at how much money in government tends to disappear, so we’re trying to put an end to that and bring more transparency to government at all levels.”

Lewis spent 9-1/2 years in active military duty, part of the time as a counter-intelligence agent. He then transitioned into the National Guard. He drills at Ft. Indiantown Gap where he is also an instructor for the scout leadership course.

It comes as no surprise then that Lewis is a big supporter of military families and is working on legislation to benefit them. He sympathizes with the family members of service men and women who are deployed and gone for long periods of time.

“I’ve introduced a school choice for military families bill that essentially provides an Education Scholarship Account (ESA) for families of active duty service members. A lot of folks, every two or three years, they’re being stationed somewhere else.

“So if you’re in Pennsylvania, you’re paying your property taxes, you’re going to get an ESA that essentially allows you to—if you’re paying for a tutoring service or you’re home-schooling, it will help offset some of those costs.”

Lewis is also going to be introducing in the fall a long-term care, tax credit bill that will offset costs for such care.