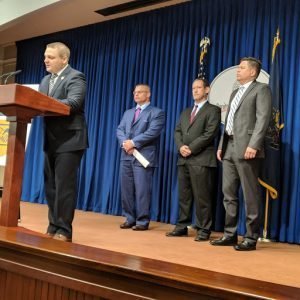 State Rep. Aaron Bernstine (R-Beaver, Butler, Lawrence) has introduced legislation that would separate public and private schools for most sports in PIAA state championship play. The Pennsylvania Catholic Conference is fully on board with House Bill 1600 and, in fact, has worked closely with Bernstine for several months on crafting the measure.

It’s no coincidence that Bernstine is naming his bill “The Parity in Interscholastic Athletics Act.” Yes, that’s PIAA as well.

“This bill is equally centered and focuses on students and student athletes from private and public schools across Pennsylvania,” Bernstine told the press at the Capitol Tuesday morning. He explained that his bill only modifies the state play-offs. Everything will remain the same through the district championship.

“And then at the very end, the one bracket of the public schools and the other bracket of the private schools will play each other in what we’ll call a Super Bowl—or a final championship game.”

“This legislation is not just about trophies and rings and banners. This is also about making sure that students are protected,” Bernstine said, noting that it eliminates transfer rules up until the mid-point of the season. It also offers Catholic schools equal representation on the PIAA board.

Eric Failing, the Executive Director of the Pennsylvania Catholic Conference, says the compromise was made in the face of impending change and offers Catholic schools and students many benefits and protections. Failing had been concerned that Catholic schools in certain regions would be avoided by public schools, who were threatening to break away from the PIAA.

“This is about academics. This is about athletics. And this is about fairness,” Failing told the press Tuesday morning. “We care about the kids. We want to make sure that all the kids across the Commonwealth have an equal and fair opportunity to participate in sports.”

Failing sought to reassure anyone with any initial concerns.

“Please, don’t make any snap judgements or any snap decisions until you get a chance to fully look at the legislation. I think we made a lot of positive steps in this bill to protect all of our student athletes from all of our different schools, whether they are public or private. This is about the kids. It’s what we care about. It’s what we’ve always cared about.”