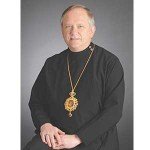 The appointment was publicized in Washington, January 19, by Archbishop Carlo Maria Viganò, apostolic nuncio to the United States.

He was professed as a member of the Franciscans in Sybertsville, Pennsylvania, in 1985, and ordained a priest in 1987. In 1996, he was incardinated into the Eparchy of Van Nuys, California, and named bishop of Van Nuys in 2002. In 2007, he was named bishop of the Byzantine Catholic Eparchy of Passaic, New Jersey.

The Archeparchy of Pittsburgh is one of the two Byzantine Catholic and eight Roman Catholic Dioceses that comprise the Pennsylvania Catholic Conference. Archbishop-elect Skurla will sit on the PCC Board of Governors.

Welcome and Congratulations from the PCC to Archbishop-elect Skurla!