Pope Francis: We must not abandon the elderly 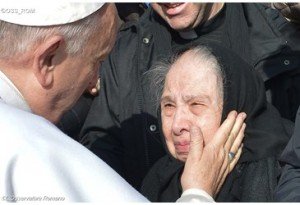 (Vatican Radio) Pope Francis on Thursday addressed members of the Pontifical Academy for Life, who are meeting in Rome for their General Assembly.

In his remarks, the Holy Father spoke about the theme of the Assembly: “Assisting the elderly and palliative care.” Palliative care, he said, “is an expression of the properly human attitude of taking care of one another, especially of those who suffer. It bears witness that the human person is always precious, even if marked by age and sickness.”

Pope Francis also spoke of the duty of honouring the elderly, which he associated with the biblical commandment to honour one’s parents. On the contrary, he said, the Bible has a stern warning for those who neglect or mistreat their parents. This judgement applies today when parents, “having become older and less useful, are marginalized to the point of abandonment.”

The Pope explained that “to honour” can be understood in our day “as the duty to have extreme respect and to take care of those who, because of their physical or social condition, could be left to die, or ‘made to die’.”

Palliative care, Pope Francis said, recognizes, at the end of life, the value of the person. He called on all those involved in palliative care to preserve this spirit of service, and to remember that “all medical knowledge is truly science, in its most noble sense” only if it has in view the true good of the human being, a good that can never be achieved when it acts contrary to human life and dignity. “It is this capacity for service to the life and dignity of the sick, even when they are old, that is the measure of the true progress of medicine, and of all society.”

Click here to read the full text of the Holy Father’s address to the Pontifical Academy for Life.