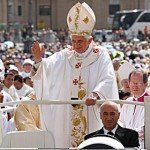 Pope Benedict XVI said the Year for Priests might have been ruined by the clerical sex abuse scandal, but instead became a “summons to purification” in the church.

Concelebrating Mass June 11 with some 15,000 priests, the pope said that “the enemy,” Satan, wants to drive God out of the world and opposes those who work to ensure that God is at the side of every man and woman, especially in times of trouble.

“And so it happened that, in this very year of joy for the sacrament of the priesthood, the sins of priests came to light — particularly the abuse of the little ones, in which the priesthood, whose task is to manifest God’s concern for our good, turns into its very opposite,” the pope said in his homily at the Mass concluding the Year for Priests.

The priests, 80 cardinals and 350 bishops and archbishops, who were sitting under the hot sun in St. Peter’s Square, signaled their agreement with the pope’s statement by applauding.

The Vatican said that with so many priests vested for Mass and reciting together the key words of the eucharistic prayer with their hands extended toward the altar, the liturgy marked the largest concelebration ever held at the Vatican.

Addressing the abuse scandal in his homily, Pope Benedict said the Catholic Church begs forgiveness from God and “from the persons involved, while promising to do everything possible to ensure that such abuse will never occur again.”

In admitting men to the seminary and priesthood, he said, “we will do everything we can to weigh the authenticity of their vocation and make every effort to accompany priests along their journey, so that the Lord will protect them and watch over them in troubled situations and amid life’s dangers.”

The priests and bishops, who turned St. Peter’s Square into a sea of white albs and stoles, were well aware of the scandal and of the shadow of doubt it cast over the Catholic priesthood.

Read the rest of the article at www.catholicnews.com.

Read excerpts of the pope’s homily on the CNS blog.