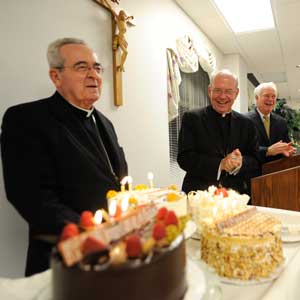 The Bishops of Pennsylvania’s eight Roman Catholic and two Byzantine Catholic dioceses gathered in Harrisburg on October 1 for the Annual Meeting of the Pennsylvania Catholic Conference (PCC).

As the Board of Governors of the PCC, the Bishops meet each year to establish the principles of the PCC and determine its policies. This year marks the Conference’s 50th anniversary.

The PCC is the public affairs arm of the Catholic Church in the Commonwealth of Pennsylvania. As such, it formulates policy positions in reference to state government programs, legislation and other policies that affect the common good and the interests of the Church. PCC represents the Church before all branches of state government and other statewide groups. PCC’s professional staff help identify the needs of Pennsylvania citizens concerning morality, health, welfare, education, and human rights. They work alone and with other groups to meet these needs and prevent and eliminate conditions that cause moral, social, educational, and health problems.

The PCC also aims to foster a public understanding of the Church’s teaching and concern about these issues.

In addition to celebrating the many accomplishments of PCC’s 50 year history, the Bishops discussed the status of the Educational Improvement Tax Credit (EITC) program, health care reform in Pennsylvania, and developments in the effort to protect marriage across the country; and outlined a plan to invite concerned Catholics to get involved with the Pennsylvania Catholic Advocacy Network.

To read the latest news about Catholic education, religious liberty, life and the dignity of the human person, marriage and family, social justice, health care, and faith and politics, log on to pacatholic.org. Or, become a member of the Pennsylvania Catholic Advocacy Network to receive alerts on legislative issues. Sign up at pacatholic.org/current_issues/catholic-advocacy-network Join us. Help the Catholic voice to be heard. Make a difference.