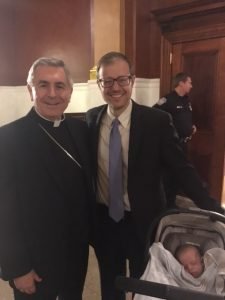 “We must always be vigilant in preventing such atrocities,” said Matthew Handel, Chair of the Pennsylvania Jewish Coalition. “This annual civic commemoration is essential to acknowledge and reflect on the catastrophe that fell upon the Jewish people and other groups of victims who were the recipients of unfathomable bigotry and hatred.

“We must never forget, so that we do not allow this tragic chapter of history to be repeated.”

The Pennsylvania Jewish Coalition hosted this year’s Civic Commemoration of the Holocaust on April 24, 2017, at the State Capitol.  The 33rd annual ceremony included remarks from many elected officials including Governor Tom Wolf and resolutions from the Pennsylvania Senate and House.

The ceremony also included the lighting of candles by Holocaust survivors, and children and grandchildren of survivors, an essay reading from students, and an interfaith message by Bishop Ronald Gainer of the Roman Catholic Diocese of Harrisburg.

“The crimes of the Nazis began with a false understanding of humanity – that there are different “grades” of being and worth among people. This misguided idea that human beings differ from each other in terms of dignity, importance, or worth,” said Bishop Gainer, “must be categorically rejected as a direct contradiction to a moral and democratic society.”