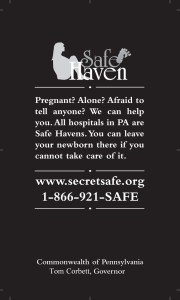 UPDATE: House Bill 1090 was passed by both chambers of the General Assembly and signed into law by Governor Tom Corbett on July 2, 2014.

The Pennsylvania Catholic Health Association (PCHA) and the PCC support House Bill 1090, legislation that would amend the Newborn Protection Act.

HB 1090 would permit police stations, in addition to hospitals, to be designated as sanctioned safe havens for placing unwanted newborns. This bill has the potential to prevent tragedy by providing parents an additional location at which they could place their newborns. In turn, the newborn would be able to receive medical care and appropriate placement.

According to the Department of Public Welfare, which runs the Safe Haven program, “Young girls and women who might be hiding their pregnancies or aren’t ready to be mothers are often scared, and don’t know where to turn. Out of fear or shame, some mothers abandon their baby hours after birth. Safe Haven gives parents an option that is both safe for their child and confidential.”

If passed, HB 1090 would make Pennsylvania the 27th state to expand their “safe haven” definition to include police station, and would provide another avenue for parents in their time of need.