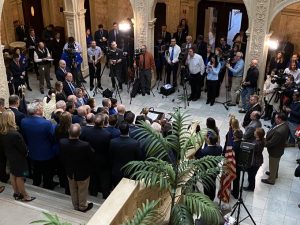 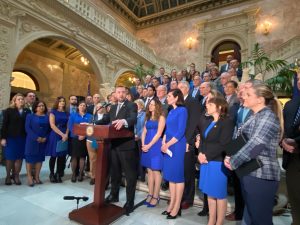 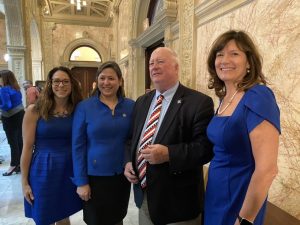 The Pennsylvania Catholic Conference today thanked members of the state House for their near-unanimous approval of a package of bills to address the problem of human trafficking.

The pictures here are of a news conference that preceded the votes at the Capitol.  There was a huge turnout of House members, mostly of Republicans, but also some Democrats that felt strongly about trying to put an end to human trafficking.

The PA Catholic Conference has strongly supported these measures from the beginning.

“Human trafficking is a scourge that not only still exists, but thrives all around us,” said Eric Failing, the Executive Director of the PCC.  “The Catholic Church has always been at the forefront of this fight, caring for the victims of human trafficking. It is good to see so many of our lawmakers are committed to this effort as well.”

The anchor of the package of bills was Senate Bill 60, known as the Buyer Beware Act, authored by Sen. Kristin Phillips-Hill (R-York).  Today’s passage means that bill will head directly to the Governor’s desk for his signature.

“These bills put forth a strong package of penalties that we believe will help to deter human traffickers and their recruiters,” Failing said.

Those bills will now move to the Senate for full consideration.