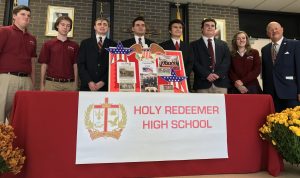 “We are a group of students who care about our government, our veterans, and our country as a whole. And we’re doing small things that make a really big impact.” – Nate Roppelt, Sophomore, Holy Redeemer High School

A few summers ago, 12th-grader Ben Smith was working at a Scranton-area Veterans’ Administration (VA) Hospital. While there, he noticed veterans were receiving donations of personal care items, however, he didn’t think they were getting enough.

Smith belongs to the Holy Redeemer High School Patriotic Club. He brought the issue to the attention of the club, and as he describes it, it took off from there.

“They need our help,” says Smith.

The club, currently in its third year, seeks to honor and serve past and current members of the U.S. military.

Throughout the school year, students collect items such as shampoo, shaving cream, socks, toothpaste and toothbrushes. They have received an overwhelming response in toiletry collections so they have expanded the donation list to include board games, puzzles and other items that could be a source of entertainment for the veterans in the hospital.

“I think it makes them feel happy that they are not forgotten, and I think this club helps them to know that,” says Mary Grace Eckert, who is in her second year with the club. 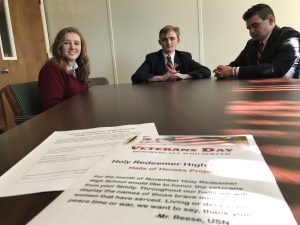 Students collect the items throughout the school year and traditionally deliver them to a local VA hospital in May.

Teacher Joseph Szewczyk advises the club and recalls a time he was dropping off the supplies with the students, who were in another section of the hospital at the time: “One of the veterans came up to me, and he saw everything that was going on and all he said to me was two simple words: ‘thank you’.”

“No matter if you’re Catholic, Jewish, or anything else, it’s good to help people out because they’re all part of our nation.” – Roppelt