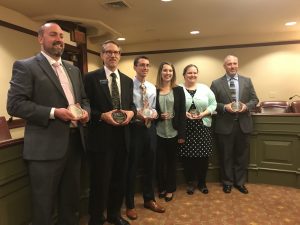 “Joe Rosi is the epitome of an administrator who leads by example. His kindness and empathy toward students has engendered a relationship of trust and mutual respect. Additionally, Joe has created a collaborative environment where teachers are encouraged to be empowered to think outside of the box.”

“Paul Larrea embodies all of the essential characteristics of an effective educator and positive role model. He teaches with integrity, fairness, compassion and resiliency. His passion for education is unmistakable.”

PA-CAPE established the yearly awards ceremony to elevate the status of private education in the eyes of the communities they serve as well as the Pennsylvania legislature.