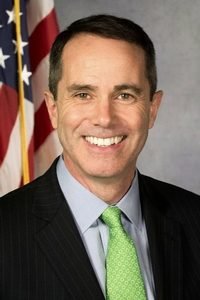 There are a number of attorneys that have made the jump to holding public office. It seems there have also been a fair amount of teachers who have gone into politics as well. But I can’t recall seeing any elected officials who once worked as attorneys *and* as teachers. Well, PA Sen. Steve Santarsiero is one such individual.

It was back on September 11th, 2001 when Santarsiero sat in his Newark, N.J. law office and watched the terrorist attacks on New York City. It motivated him to seek a career in public service. He got a teaching certificate by taking night classes at Holy Family University—a Catholic college–and eventually became a high school social studies teacher.

But he soon got pulled into another form of serving the public. In 2003, Sentarsiero ran for and won a seat as a township supervisor. In 2008, he won a State House seat. Last year he was elected as a State Senator.

It’s no wonder with his teaching background that he continues to be a leader in education. He talked about the two Blue Ribbon Catholic Schools in his district.

“Both Mt. Carmel and St. Jude– I’m really proud of the kids and obviously the teachers and the families that help make them such strong schools. I want to congratulate them and send along my best wishes to them and cheer them on to continue their good work.”

Santarsiero’s district is full of good schools. “We have some really terrific schools—both private and public. We are really blessed that we have communities that support them. And one of the most important things—I know as a former public school teacher myself—is having strong parent support and strong family support for our schools. That makes a difference.”

I talked with the Senator in his Newtown district office. But it’s an event that happened in another Newtown in a different state that has motivated him to take action against gun violence.

“That’s been an issue that I’ve been involved with, particularly since the tragedy in Newtown, Connecticut. We’ve been trying for years to get reasonable gun violence prevention measures passed in Harrisburg. We’re continuing that fight. I continue to be one of the prime sponsors of the background check bill that would require that a background check be performed every time a firearm was purchase in Pennsylvania, whether it be at private sale or otherwise. We’re hoping we can get that bill up for a vote.”

Santarsiero has also proposed a bill in the Senate that would call for safe storage of firearms when they’re not being used.

“We have found in states like, for example, Connecticut and Massachusetts that have passed those types of laws… that the numbers of suicides and homicides and even just accidents that have occurred with guns have dramatically decreased. So that’s a reasonable thing that we can do in Pennsylvania.”

Santarsiero also feels there is a good opportunity for the state to grow the economy through the promotion of renewable energy.

“We are sitting just a few blocks away from a company that sells solar panels and is doing pretty well,” he said. “But we need to increase our standards in Pennsylvania. We’re lagging far behind our neighboring states in the amount of renewable energy that is required on an annual basis. And I think we can do that. I have a bill. It’s a bi-partisan bill that would do that. I’m pretty excited about that.”