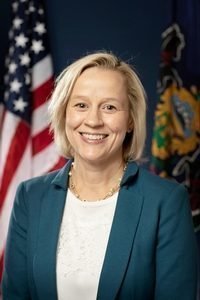 You absolutely can NOT call PA Sen. Maria Collett a career politician. It has become a negative connotation over the years, but it’s something that does not apply in her case. Collett is a freshman Democratic Senator representing Bucks and Montgomery Counties.  She has also been an attorney AND a nurse!

“It’s interesting when I tell people the different career paths that I’ve had, it seems as if they don’t really fit together,” Collett told me during a visit to her district office in North Wales. “But when I talk about advocacy and when I talk about the work I’ve done in those fields…when I was an attorney I was an advocate for children that were victimized by abuse and neglect. So for me it was really an extension of finding ways where I could be impactful in people’s lives.”

After working as a Deputy Attorney General in Camden County, N.J. Collett went into nursing and became a Level I trauma nurse, and later worked in pediatric home health and in long-term care working with aging adults.

“I’m really thankful to have found bedside nursing. It really turned into a calling for me,” she said. “Once I landed at the bedside where I was interacting with people and working to hopefully get them to a better place and a better quality of life than they ended up in the hospital with, it felt like the right fit for me.”

And then she was ready for yet another jump—this time into the field of public service.  Collett sees it as a continuation of her career path. “It’s finding a way to advocate for people on a broader scale to improve their quality of life.”

Collett was a political novice when she ran for the 12th District Senate seat last year. She won handily in November, defeating Republican Steward Greenleaf Jr., the son of the man who just retired from the PA Senate and held the seat for decades.

One of her top priorities now is helping older citizens maintain their quality of life. She has a live-in motivation in that cause.

“My dad is 84. He lives with us. We’re honored to have him. But I know a lot of people that are aging don’t have the privilege of living with family members, so what can I do in the legislature to assist our aging population to make sure they can age the way they want to, where they want to and enjoy the remaining years of their life. “

Another public health issue that Collett is focused on is improving and maintaining safe drinking water. She says the run-off from the military base in her district in Horsham is affecting people’s health.

“Those chemicals have been linked to certain medical conditions that can be devastating. For me it’s a way of figuring out how we hold the polluters accountable–how do we make sure they’re held accountable for the cleanup and how do we have access to safe and clean drinking water?”

Collett assures residents in her district that they do have safe and clean water, thanks to the municipalities taking the lead in seeing to the quality. To help continue that, the Senator has proposed two bills—SB 581 and SB 582—that talk about the chemicals in the water and “what needs to be done to help the water authorities keep the water safe and maybe unlock some funding to help with clean-up,” she said.

“It’s really about wanting to do the right thing for people. But there is a barrier there. It comes at a high cost and people are paying for that with their water bills.”