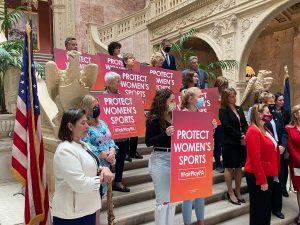 A number of PA State House Republicans today introduced The Fairness in Women’s Sports Act at a news conference at the Capitol in Harrisburg. It comes in response to an executive order from the Biden Administration requiring that biological males be permitted to compete on women’s school sports teams.

“We think that (the President’s order) violates Title IX and reverses nearly 50 years of advances for women,” said Gleim.

The sponsors often referred to the importance of Title IX, which was passed in 1972 as a federal civil rights law. It prohibits sex-based discrimination in any school or other education program that receives federal money. The five Republican lawmakers feel that allowing biological males to compete as females would be a direct contradiction of what Title IX stood for.

“We are living in crazy times that we even need legislation like this,” said Borowicz. “I’m proud to stand along side these other women to protect women’s sports and stand up for women athletes.”

“Biological males will always have advantages over women,” said White, who said it also comes down to a safety issue. “We must ensure that only biological females are competing in the female category. Allowing biological males to compete in women’s sports destroys fair competition and women’s athletic opportunities.”

“We are robbing them of much more than a ribbon, a state title, a scholarship,” said Keefer. “We know that Title IX is credited with decreasing the drop-out rate of girls in high school, and increasing the number of women who pursue higher education and complete a college degree.”

“We are here to reaffirm the strength of Title IX and what that does for our country,” said Gaydos, who talked about the lasting benefits of athletic competition. “On the field you encounter multiple obstacles and you learn how to compete. It’s not unlike what many women experience when opening or operating a business.”