The newest group of lawmakers to come to Harrisburg includes State Representative Todd Polinchock, a Republican who won election this past November in the 144th District in Bucks County. It was an opening that was created when long-time officer holder Kathy Watson decided not to run for re-election.

There may not be anyone else in the group of newcomers with more enthusiasm than Todd Polinchock.

“We’ve hit the ground running,” Polinchock told me when I met him in his district in December. “I’m not the kind of guy that likes to sit back.”

And Polinchock had this to say about his job as state rep: “This is probably the most rewarding thing I’ve ever done—being able to represent my neighbors and constituents.”

That comes from a man with a resume full of serving our country.

Polinchock graduated from the U.S. Naval Academy and then flew as a combat pilot in Desert Storm. He came home as a Service Disabled Veteran. He retired as a Navy Commander with 20 years of service.

He has worked the last several years as a successful realtor, being named Bucks County Realtor of the Year in 2010.

The PA Catholic Conference reached out to Polinchock to talk with him about two schools in district – St. Jude Catholic School and St. Joseph/St. Robert School being named as Blue Ribbon Award Schools of Excellence.

“I’m proud to be a parishioner here at St. Jude and along with St. Joseph/St. Robert, to have two blue ribbon schools in my district is fantastic,” Polinchock said. There were only nine Blue Ribbon schools in PA—all in the Philadelphia Archdiocese.

“It’s pretty amazing and it’s a testament to the work that they do, the community service that they do. We’re bringing our kids up right in the district. It shows by the way our community comes together and helps people.” 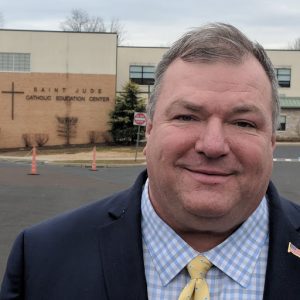