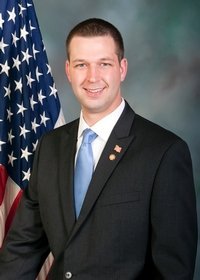 Lawmakers in Harrisburg have been approaching school safety from many angles. One bill in particular by Rep. Matt Gabler (R-Elk & Clearfield Cos.) would call for special signal lights to be put on smaller school vehicles.

“I had the idea come to me because I have some constituents who live on a rural road without street lights,” Gabler told me. “They put their little girl in a school “vehicle.” It’s a specific term. It’s smaller than a school bus. It’s basically a van.

“These school vehicles have a placard on the side but they don’t have any special lights and they’re tough to see, especially at the top of a hill or around a blind curve.”

Gabler’s bill would call for such vehicles to have a yellow flashing or rotating light on their roof if officials thought it was useful for their routes. He says he’s been talking with several transportation contractors who tell him they would love to take advantage of that to keep everyone safer.

“Sometimes you get win-wins you come up with. Not everything in Harrisburg is always a knock-down, drag-out fight,” said Gabler. “A lot of times you come up with real solutions that help real people and make an impact on people’s lives. That’s what makes this job so interesting.”

And speaking of win-win, Gabler is a big proponent of the Educational Investment Tax Credit. It allows businesses to make a donation to a scholarship organization or an educational improvement organization in exchange for a credit on their state taxes.

“It’s a great program,” said Gabler, who is a product of the Catholic school system. “What it allows them to do is drive money into our education system. Some of that money is used in non-public schools like Catholic schools to provide scholarship money to offset tuition. But our public schools are able to use some of this money for Science Technology Education and Math programs. I’ve got schools that have used it for robotics competitions, and to help their music and dance programs.”

Gabler says it brings more money into the education system than it costs on the other side in the form of the tax credit since donors aren’t able to write off the full amount of the donation. Still, as he says, it’s a win-win.

“I think my favorite legislation that we’ve done during my time in the House is the expansions that we’ve made to this program that have allowed this universe of tax credits to grow. As a result, more and more businesses through their generosity can be providing money to our education system to help our students and ultimately help our educational systems—public and non-public.”

Gabler has spent several years of service in the U.S. Army Reserve. He was deployed to the Middle East last year and spent nearly the entire year there while getting promoted to the rank of major.

He got involved in politics back in 2008 when he decided to run against incumbent Democrat Dan Surra, a man who had held the office since 1991. Surra was going to be running unopposed when Gabler decided to jump in.

“I actually did a write-in campaign during the primary to get on the ballot,” Gabler said. “From there I started knocking on doors. I went door to door and got a lot of ‘you’re running against who? You don’t have a chance.”

Gabler told those people he had a vision for the future of the area. They apparently liked what they heard and it turns out Gabler did have a chance. He beat the well-entrenched incumbent.

“It’s been a great opportunity and a great responsibility and something that has enabled me to get involved in a bunch of great conversations, whether it’s school student safety, or the EITC or other things that are important to folks. It’s been a great ride.”