PA Rep. Jesse Topper Looks for an Efficient Government, Not a Costly One

Like many lawmakers in Harrisburg, State Rep. Jesse Topper (R-Bedford, Fulton and Franklin Cos.) will be keeping a close eye on budget talks at the Capitol.  The process started after Governor Wolf unveiled his budget proposal earlier this month.

“It’s basically the Governor saying ‘this is my wish list,’” said Topper. “That’s the way I look at it. “

There’s a good chance that Topper and his Republican colleagues will have a different set of wishes. Topper said they will be looking at what is needed to run the government efficiently.

“There’s always going to be disagreement on that number. It’s a negotiation,” he said. “But from my standpoint, I’m always going to be advocating for spending less money–being more efficient with what we have and not going back to the tax payers for their hard-earned money.”

“This is a way that we can make sure that businesses who want to contribute to our Catholic schools—and private schools really, whether they are Catholic or not, that we can’t give direct dollars to directly through the state, this is a chance for them to be able to contribute to their communities and get tax deductions through that. It has been a widely successful program that has benefited 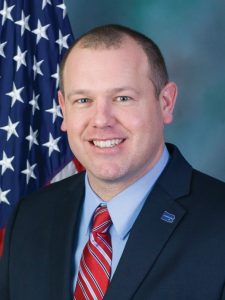 both the communities and the businesses they serve in, as well as the schools. “

Topper sees a lot of support for not only keeping, but also increasing the EITC.

“We’ve seen increases in the EITC since I’ve been here. Speaker Turzai has been leading the charge on that, as well as a former colleague of mine, Jimmy Christiana and Senator Regan when he was Representative Regan in the House. There’s a lot of bi-partisan support for increasing the EITC. “

Another issue that Topper will keep his eye is abortion. He is part of a staunch Pro-Life Caucus at the Capitol. Like many of his colleagues he was alarmed by what happened in New York with the new abortion law.

“You’ve seen a lot of—even millennials,” Topper said, “who have come to understand that – I think technology has really made a difference, when you can see these children through ultrasounds…I knew what my kids looked like before they were born. That technology wasn’t available back in the time of Roe V. Wade.”

“It just wasn’t something that people could look at and understand. Now they can. The science is on our side. And I think that’s one social and cultural issue that we’ve moved to our side, the pro-life movement.”

And Topper joined his colleagues in adding re-assurance to pro-lifers in PA.

“This is something I don’t expect to see in Pennsylvania under this legislature but we have to have an answer for it—as we talk about the value of life at conception, what these little children mean to us as a society and how we are going to protect them.”