PA Rep. Gary Day Practices What He Preaches: To Get Involved! 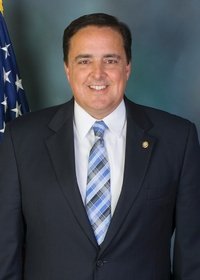 Rep. Gary Day (R-Berks, Lehigh) said he recently took stock of his volunteer activities and realized he wanted to spend more of that time and energy helping his parish. Day is a life-long Catholic.

“Like many Catholics probably, I feel a little guilty that I could be more involved than I am,” Day told me in a recent visit to his Lehigh Co. district office. “With my job it’s hard time-wise to be involved so I try to serve in the things that I’m really good at. I would advise any Catholics, any Christians to get involved with your parish, with your church and try to give that little bit and that’s what I try to do.”

Day makes it a point to talk to people about getting involved, about how the church gives people opportunities to be “Christ-like.’

“We have about 30 committees at our church. That’s a lot for a Catholic church or any church and I’m proud of the work of each one. I can’t sit on each one of those committees, so I sit on one or two committees that I think I can make a difference.”

Day came from a “mixed-family”—mixed in that his mom was Catholic. His dad was not, but Day says he was always very supportive of his children learning the teachings of the Catholic faith.

“I’ve tried to use everything that I learned to be the best version of myself,” he said. “I try to help other people in my job as state representative.”

Day took office in the House in 2009. He says that people may look down on the political nature of Harrisburg but he sees it as a very positive thing.

“There are 203 of us that represent 12-million people,” he said. “People ask ‘how do you get along with 203 people’? Well, actually we don’t get along, all of us. But we try to. We try to get to know each other and work with each other.”

In an age of strong feelings and many times bitter divisiveness in politics, Day feels it is important to work with those who are on the on the other side of the aisle or the issue. He recalled Governor Wolf’s message on gun control last Friday. It came in front of supporters from his party.

“It’s not real profound to stand in a room full of people who agree with you and say ‘let’s charge up this hill.’ That’s not being a statesman,” Day said. ‘Being a statesman is working with people from both sides. We’re all human beings. We’re all God’s children.”

Day says that he sees the battle continue every day between what is right and what is not right. He says you can see it every day on TV, the internet.  That’s why he made one more plea for folks to get involved.

“I want to spur them to get involved. I trust them to decide what is right and wrong…Any person who gets involved or engaged and has goodness in their heart probably has the right answer or part of the the right answer.”

Day is staunchly pro-life and feels that during his time in office there has been a substantial progress, through efforts to change the permitted time for an abortion from 24 weeks to 20 weeks.

“We have to wrestle with the Supreme Court ruling that we’re all living under since 1973,” Day said. “And within the confines of the federal framework and the structure of the law and we do that. We do that well.”

He said things came to light a few years ago with the abortion clinic run by Dr. Kermit Gosnell in horrifying fashion in Philadelphia. He said all lawmakers were on board to try to prevent that from ever happening again.

Day wants people to understand some of the thought process that goes into the abortion debate.

“Anybody who opposes a pro-life stance usually talks about a woman’s individual rights and I think this is one of the clashes in our government structure of individual rights,” Day said. “When two beings are inextricably and physically tied together and the actual life of one is dependent on the other, that’s when two individual rights can conflict. That’s when it’s up to government to make that decision—where is that line to protect that one life?”