I checked to see if Rep. Brandon Markosek’s hands were bleeding. They weren’t. Last year that might not have been the case though, when he campaigned for the 25th District seat that he was elected to in November.

“During the campaign I knocked on 14,000 doors,” Markosek said. Ouch. “The whole process was to know what the problems were that were facing my district.”

He found a number of issues to deal with, but perhaps none more pressing than the aging infrastructure in his Allegheny County district, which includes several heavily-traveled roads, like the Turnpike and routes 30 and 22.

“Our bridges and roads are a very big issue,” Markosek said. “They were built about 75 years ago, so they are past their shelf life. We need to make sure that folks can get to work in the proper time and also make sure that we have a district that businesses want to come to.”

As many cities have seen, the aging infrastructure issue includes more than just roads and bridges. It includes pipes.

“If our district does not have proper sewage, it’s going to be very hard to bring in business to our district. This issue is affecting all districts so I’m hoping our budget this coming session will focus on those issues.”

Markosek is also looking at other concerns, including putting forth a bill that would call for special ballots for voters who are blind or dead. He says right now there are only three states that provide that. Markosek has also co-sponsored legislation that would protect “good Samaritans” who administer Naloxone to those in the midst of an overdose.

While Markosek’s district is in Allegheny County, he spent a lot of time in the Harrisburg area growing up and graduated from Trinity High School in Camp Hill. His parents lived a couple hundred miles apart so he got a chance to travel the state for 13 years. 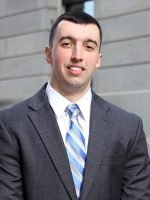