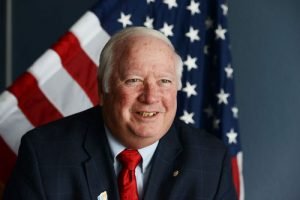 It was just a few hours before the state House would vote on a package of bills to combat human trafficking. A large group of representatives, most of them Republican, took to the steps of the lobby in the Ryan building at the Capitol to show their support for the legislation.

“I’d never seen so many people that were on those stairs,” said Rep. Bob Brooks (R-Allegheny, Westmoreland), who was one of them. He talked with me in his Capitol office shortly after the vote. “I’ve heard people say it was the largest group of legislators they’ve seen.”

“They were all focused on either greater sentencing for the perpetrators, like the people that were dealers of the sex trade,” Rep. Brooks said. “It was also people that were victims. It was ways to try to help them back into society sooner. Instead of blaming them, it was working with them.”

Brooks is in his first term as a state representative after being elected in November of 2018. But he has a wealth of experience that could fill up several web pages.

He was Chief Financial Officer at Chrysler Corp. at one point. He owns the Pittsburgh Indoor Sports Arena. He was part of a group of local businessmen that helped save the Pirates and the Penguins. He served the Borough of Murrysville for a total of 26 years as councilman and mayor. I was not surprised to hear that, since Brooks is about as down-to-earth as you can get and a definite ‘people-person.’

“What that does is, you spend your whole time out with the people,” Brooks said. “You’re trying to make things better. When you’re the mayor, you do a whole lot better at getting things done sooner, than when you’re up here. But when you’re up here, you’re dealing with helping a whole lot more people. It just means you can’t do it by yourself.”

Brooks says that means you have to form groups and caucuses to get things done. He recently worked as part of the group to pass bills to help first responders.

“My area has 16 fire departments. Those departments are all volunteers. One of the problems is that volunteers have gone from 300,000 down to 38,000 in the last ten years. That’s for all of our fire departments in the whole state. We need to find ways to get young people to want to get involved.”

Brooks worked with other lawmakers to try to make that happen.

“One of the programs that we passed is that if you’re a firefighter while you go to college and for four years after, we’ll pay your education. We’ll also take the people that are there and we’ll give them a rebate on the local and the county taxes….It’s not huge pay, but it’s thank you’s and appreciation.”

Brooks is very well acquainted with the people of his district, which is northeast of Pittsburgh.  He says it’s a group that attends church regularly and is strongly pro-life. He found that out last year as a candidate.

“I had several people at the polls last year. I remember one young woman came up and said ‘you are pro-life, right?’ I said absolutely. She said ‘well that’s good, because my parents were on the borderline and if they hadn’t become pro-life right at the end, I wouldn’t be here. ‘ You hear that sentiment throughout the area.”