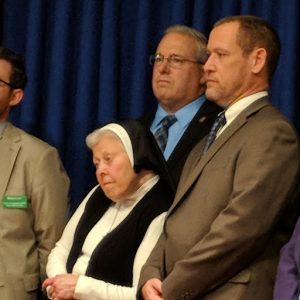 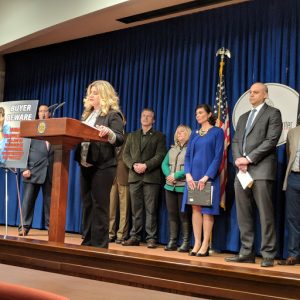 The Pennsylvania Catholic Conference on Wednesday announced its full support of the “Buyer Beware Act” to fight human trafficking. The bill is being introduced by two York County lawmakers—Rep. Seth Grove as House Bill 12 and by Sen. Kristin Phillips-Hill as Senate Bill 60.

Three members of the P.C.C. stood behind Grove and Phillips-Hill as they announced the bill. They included P.C.C. Executive Director Eric Failing, Education Director Sean McAleer and Sr. Clare Schiefer, the President of the Pennsylvania Catholic Health Association.

“This is a great move,” said Failing, who praised the work of Grove and Phillips-Hill. “We must unite to eliminate the scourge that is sex trafficking. It’s heart-breaking to know that such a crime has existed, especially in 2019.”

The PA Catholic Conference fought for similar legislation that was signed into law by Governor Wolf in October. The P.C.C. backed State Senator Stewart Greenleaf’s Senate Bill 554, which protects child victims of human trafficking. It prevents such victims of human trafficking and sexual exploitation from being criminally prosecuted for crimes they have been forced to commit.