by Hill
civil rights, I Have A Dream, march on washington, martin luther king jr., Social Justice
Comments are off 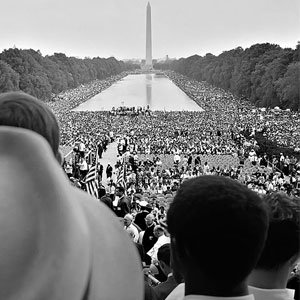 As we mark the 50th Anniversary of the March on Washington for Jobs and Freedom that occurred on August 28, 1963, we call attention to this significant event in the history of the struggle for Civil Rights for African Americans and other minority racial groups in the United States.  Those who participated in the March on Washington came from different races and faith denominations, but were all united for a just cause.  Seeking to touch and to move the heart of America, they came to the nation’s capital and marched to advance the cause for Civil Rights, calling for an end to segregation. They called attention to the economic disparity that existed for African Americans and other minorities in this country. St. Paul in Sacred Scripture declares, “How beautiful are the feet of those who bring the good news!” (Romans 10:15), and the participants marched on foot and proclaimed the good news of our God who acts in favor of the marginalized in our country; they called upon the nation to enact legislation that would benefit those suffering and forgotten. Dr. Martin Luther King, Jr. delivered his famous ‘I Have A Dream’ speech, which redirected the moral compass of the nation toward concern for the cause of justice. Even today his words continue to inspire us. Joining Dr. King at the March on Washington were other religious, civic and community leaders, among them Cardinal Patrick O’Boyle, Archbishop of Washington, who delivered the invocation, and many Roman Catholic priests, religious sisters and brothers and lay faithful.

Fifty years later, we cannot deny the wide spectrum of advancement in many realms of society. We laud the fact that in our country there is more racial and cultural diversity among the leadership in both the public and private sectors. Many more doors of opportunity are open and certain legal remedies are in place. These benefits have allowed members of minority racial groups in our country to advance, and to offer more fully the benefits of their gifts and talents in efforts to work toward the common good for all in our country. The March on Washington and the struggle for Civil Rights have brought about significant accomplishments in the past 50 years.

Read the rest of the statement from the United States Conference of Catholic Bishops’ Committee on Cultural Diversity in the Church here.