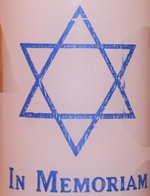 A monument to Jewish military chaplains who died in the line of duty will be dedicated on October 24 at Arlington National Cemetery, but the memorial made a stop today in Harrisburg.

Currently on display in the Pennsylvania Capitol Rotunda, the memorial will eventually be placed on Chaplains Hill next to similar memorials for chaplains of other faiths.  The memorial names the 14 Jewish chaplains who died while in service to our country, more than 250 American chaplains of all faiths have died while on active duty in the U. S. Armed Forces. The inscription atop the memorial reads “Dedicated to the Jewish chaplains who have served our country in the United States Armed Forces. May the memory of those who perished while in service be a blessing.”

Francis Viglietta, Director of the Department of Social Concerns for the Pennsylvania Catholic Conference, spoke at the commemoration ceremony. He said, “Serving as a military chaplain is a truly noble vocation and the countless, often unheralded, services chaplains provide to the men and women in the military must be appreciated and respected by all who cherish freedom and faith.”

Colonel Gregory J. D’Emma, Chaplain, U.S. Army War College and priest for the Archdiocese of Newark, also spoke at the commemoration, saying that this memorial allows “these men to watch over their charges, as they did in life, they can also do in death.” 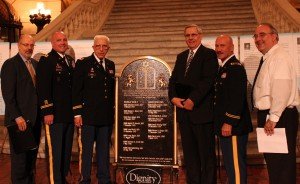 Of the fourteen Jewish Chaplains who have given their lives in service, four have ties to Pennsylvania: Rabbi Henry Goody, served a temple in Greensburg, PA before volunteering in WW II; Rabbi Alexander Goode served a temple in York, PA before becoming the first Jewish chaplain to give his life for his country by offering his life jacket to other soldiers as his troopship sank off Greenland in February 1943; Rabbi Solomon Rosen attended Army Chaplain School that was located in Carlisle, PA before his tragic death in an airplane crash in 1948; and Rabbi Meir Engel led a synagogue in Philadelphia before taking up a career as a military chaplain and becoming the first Jewish Chaplain in Vietnam.

Today’s Commemoration Ceremony was hosted by the Pennsylvania Jewish Coalition.  The October 24 ceremony at the Memorial Amphitheater at Arlington National Cemetery is open to the public and everyone is encouraged to attend.