Megan Martin: Front and Center in the PA Senate and Very, Very Busy 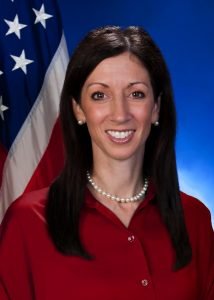 She may be the most recognizable person in the Pennsylvania Senate, and very likely one of the hardest-working people connected with the chamber. I’m talking about Megan Martin, the Secretary of the Senate and the first woman to serve in that position. She is also the Parliamentarian, Chaplain during the virtual sessions and the Right-to-Know Law Appeals Officer.

If you tune in PCN for a Senate session, you will see her, right beside the presiding officer who is running the session. That person can change, depending on the day. But Megan is always there. Or so it seems!

“As the Secretary I’m the Chief Legislative Officer of the Senate, so I’m responsible for all the legislative operations of the Senate,” she told me on a recent visit to her fourth-floor Capitol office. Incidentally, that’s a long climb and she insists on taking the stairs instead of the elevators—always busy in some way!

Martin says she has a great legislative team.

“They are responsible, for example, for creating the bill calendars that we use for session every day, for creating the executive nominations calendars when the Governor nominates individuals to serve on boards and commissions. Basically my office is the legislative heart of the Senate in terms of the legislative operations—not the policy side—we leave that to the caucuses but in terms of the processes and procedures. My folks on my team touch every bill from the moment that it’s introduced and created and then throughout the process until it’s signed by the Governor or vetoed by the Governor, or sent to a committee or laid on the table.”

Martin is not an elected official but she is elected to her position. She’s an institutional officer which means she’s elected by the senators every other year on opening day.  She serves all the members equally, regardless of their political party or affiliation.

That’s all just part of her job as Secretary, which does not include what she does on the floor of the Senate. That is part of her role as Parliamentarian.

“As such I advise the presiding officer when we’re in session, which is typically the Lt. Governor, who is the President of the Senate. Or I will advise the President Pro Tempore. That is Sen. Joe Scarnati, or if another senator has been designated by the Pro Temp to preside, I will advise them during session. I help them as they manage the business of session day to day.”

She also advises members and the staff when they have questions on the meaning and the application of the precedent of the Senate or the rules of the Senate as well as processes and procedures of the chamber.

Martin says she owes a lot to Sen. Scarnati, who selected her for the position.

“He has truly given me the professional opportunity of a lifetime. He has supported me in every aspect of the position and on every endeavor I’ve taken as Secretary and Parliamentarian to modernize, professionalize and energize my 80-person operation.”

You can tell she has a lot to do and monitor in the Senate.  That would really be a grind if you didn’t like your job. No problem for Megan Martin.

“I really enjoy what I do,” she said. “I feel very blessed. I am excited. I pinch myself when I walk into this building. It’s a privilege to come here to the Capitol every day and get to the work that I do for the people of Pennsylvania. I love that. I’ve devoted almost my entire career to public service. I was inspired by the best—people that I’ve worked for over the years and I really love what I do.”

Martin says that when she was young she wanted to be a doctor but changed her focus to law when she was in college. She was originally involved in family law, but got a chance to work for Governor Ridge and that made an impression on her and changed her perspective. She worked there for seven years.

“I was very privileged because I learned how state government works from the top down. I worked in 225 Main Capitol for my first four years….I learned from the best, and I learned by listening and observing high-quality individuals and how they handled themselves at meetings and how they treated people, particularly Tom Ridge. He surrounded himself with good, quality people. I learned very early that you are only as good as the people you surround yourself with.”