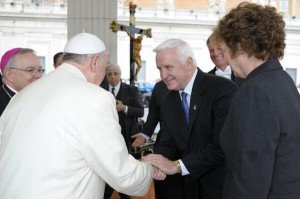 “Utterly amazing” are the words Pennsylvania Governor Tom Corbett used to describe what it was like to meet Pope Francis face-to-face before a crowd of 100,000 onlookers in Saint Peter’s Square in Rome. “I’ve met presidents. Those meetings were quite impressive,” he said, “but meeting the Pope blows that away!”

Governor Corbett is a life-long Catholic, baptized at Our Lady of Lourdes, Overbrook, in the Archdiocese of Philadelphia. As a former altar boy and past president of the Parent/Teacher Guild at St. Mary of the Assumption Parish and School in the Diocese of Pittsburgh, meeting the Pope was something Corbett never dreamed he would do. Last month, he had his chance.

Corbett’s conversation with Pope Francis was brief and in English. The governor and his wife shook Pope Francis’ hand, which Corbett described as strong, “like a farmer’s hands.”  The Corbetts thanked him for his ministry to the Catholic Church and to the people of the world. The Pope replied, “Pray for me.”

As governor of Pennsylvania, Corbett was in Rome to plan for the World Meeting of Families, which will be held in Philadelphia in September 2015. He also wanted to personally invite Pope Francis to attend the meeting and visit Pennsylvania. Corbett told the Pope that the people of Pennsylvania “would really enjoy it if you came to see us.” The governor’s conversation with the Pope left him feeling “very optimistic” that Pope Francis will come to Philadelphia next year. It is expected that the decision about the Pope’s attendance will be announced approximately six months in advance of the event.

Governor Corbett was part of a special leadership delegation for the World Meeting of Families also led by Archbishop Charles J. Chaput, O.F.M. Cap., and Philadelphia Mayor Michael A. Nutter. The delegation included corporate and civic leaders who travelled to Rome to learn more about the logistics of the global event. The World Meeting of Families takes place every three years and is sponsored by the Holy See’s Pontifical Council for the Family.

The World Meeting of Families is expected to bring tens of thousands of people to Philadelphia from more than 100 different countries. People of all faiths will come together to talk about the common challenges that families face all over the globe.

Corbett thinks Philadelphia, with its roots in religious tolerance, is the perfect place to do that. “William Penn’s holy experiment is still ongoing,” he said. “Many issues stem from families not being together. How can we strengthen families through faith in God?” This important question will be part of the conversation at the World Meeting of Families.

Registration details will be posted at www.worldmeeting2015.org. Meanwhile, Governor Corbett has advice we can all follow to strengthen families – pray, volunteer in the Church and other ministries that keep families together, and get involved with public policy advocacy. “Those of us in (public) office have tough jobs,” said Corbett. “We have to make tough decisions. Your prayers are appreciated.”