Mass for those who serve in public office

by Hill
bishops, legislature, mass, pcc
Comments are off 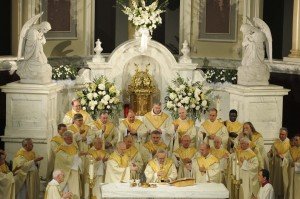 In their June 2004 statement, Catholics in Political Life, the Catholic Bishops of the United States reinforced the idea that, “Catholics who bring their moral convictions into public life do not threaten democracy or pluralism but enrich them and the nation.”  They insisted that, “The separation of church and state does not require division between belief and public action, between moral principles and political choices, but protects the right of believers and religious groups to practice their faith and act on their values in public life.”

Catholic elected officials in Pennsylvania were reminded of this responsibility as the Bishops of Pennsylvania concelebrated a special Mass in their honor on September 22, 2009.

In his homily, Cardinal Justin Rigali of the Archdiocese of Philadelphia said, “Some people in our society walk away from truth. The truth is not always easy. Some people walk away from the truth that every human being has inviolable dignity and must be protected from the moment of conception to the moment of natural death. Some turn, instead, to abortion, euthanasia, physician-assisted suicide, embryonic stem cell research, and thus turn away from the path of life.

“Some walk away from the truth that the hungry must be fed; that the laborer has dignity; that the unemployed deserve work; that refugees and immigrants deserve safe passage, rights, and opportunities; that every person deserves adequate and affordable health care and education; that religious freedom must be respected; that the bond of marriage between one man and one woman is utterly unique; that the resources of the world are to be distributed equitably; that the entertainment industry must tune in to moral standards in programming; that violence and exploitation are affronts to human dignity and that racial prejudice has no place in our society.

Catholic elected officials joined the Bishops, the Administrative Board of the Pennsylvania Catholic Conference (PCC), the Pennsylvania State Council of the Knights of Columbus and scores of faithful Catholic citizens at St. Patrick’s Cathedral in Harrisburg.  The special Mass was scheduled in conjunction with the PCC’s regular annual meeting.

Dr. Robert J. O’Hara, Jr., PCC Executive Director said, “So many of the issues we deal with in Harrisburg have serious moral, ethical and social justice considerations.  Catholic men and women who run for public office bring an important perspective to the public policy debate.  We pray that their faith makes a difference in the outcome of legislative and regulatory issues.”

The Pennsylvania State Council of the Knights of Columbus sponsored the Mass.  Wayne S. Freet, current State Deputy, said the Knights wanted to honor elected officials, but also remind every Catholic that citizenship is a virtue.

The Knights of Columbus is 1.7 million members strong, and growing. Since 1882, it has embodied the selflessness of man as it has helped overcome the problems of the world such as poverty, ignorance and apathy, things that imperil not only a single individual, but also the whole of humanity. Pennsylvania Catholic Conference is the public affairs arm of Pennsylvania’s Catholic bishops and the Catholic dioceses of Pennsylvania.