What do you do after serving for more than thirty years as a fourth-grade teacher?  Well, if you’re Margaret Egan you become a principal!

Egan followed up a long stint of teaching by becoming the principal at Saints Peter and Paul School outside of West Chester in 2002. That’s 50-years in Catholic education! You would think that deserves at least some kind of award and this past fall Egan was on the receiving end of two very prestigious awards.

Saints Peter and Paul School received the Blue Ribbon School of Excellence Award in October from the U.S. Department of Education.  Egan also won a huge individual honor in the fall–the Terrel H. Bell Award for Outstanding Leadership. It is given to just 11 principals in the nation.

There are many in the community who have been well aware of what Egan has been doing at Saints Peter and Paul way before the national honors.

“Principal Peg Egan always seems to be at the door to greet everybody,” said State Representative Carolyn Comitta, who represents the district where Saints Peter and Paul is located. “She’s there greeting her students every day and she’s greeting her teachers all the time.”

There are 371 children currently at Saints Peter and Paul. The motto here is “hearts to love and hands to serve.”

Egan says the school enjoys a great relationship with a retirement home that was built very close by.

“We need the whole community to support the school and by goodness we do have that,” she said. “We have the elderly, the parents and we try to get the young students who are alumni of the school.”

Egan hosted the PA Catholic Conference on a recent tour along with State Senator Tom Killion, who represents the district. Killion went to Catholic school himself.

“I was very fortunate to go to Our Lady of Fatima and Cardinal O’Hara High School,” Killion said. “That’s one of the reasons I support the EITC (Earned Income Tax Credit) program. It helps students who may have parents who may have a tough time making tuition payments.”

Saints Peter and Paul’s Advancement Director Barbara Downing says the EITC program has sent hundreds of thousands of dollars toward the school and is currently being used by 63 students. She said that has been the difference between coming to the school and not being able to go. 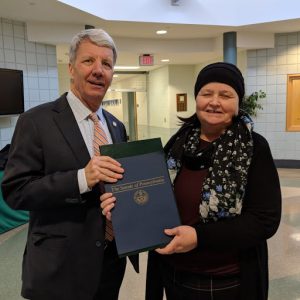