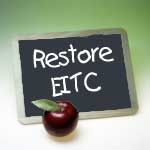 Two legislative bills have been introduced to restore funding for Pennsylvania’s Educational Improvement Tax Credit (EITC) Program to $75 million. Established in 2001, EITC is an educational program that gives children a the chance to attend the best school available to them and provides enhanced opportunities in the public schools.

Speaker of the House Keith McCall, D-Carbon, introduced House Bill 2508 with 109 co-sponsors. His bill has been referred to the Finance Committee. Sen. Jeff Piccola, R-Dauphin, introduced Senate Bill 1370 with 27 co-sponsors. While, the program was cut by $15 million last year and is slated for another $10 million reduction in this year’s state budget, both bills would restore the EITC funds to $75 million in FY2010-2011. At the same time, funding for education is slated for a $354 million increase in the budget.

“Funding cuts to the EITC Program affect Pennsylvania families directly. Last year, it’s estimated that approximately 6,000 scholarships were lost due to the $15 million cut – and if the program is cut again, the effects will be even more devastating,” says William J. Donahue, chairman of the REACH Alliance. “We strongly applaud Speaker McCall and Senator Piccola’s efforts to restore funding for this educational program and help Pennsylvania’s families.”

Many in the Legislature have called the EITC Program the best educational initiative passed in Pennsylvania in the past 15 years. Funds for the program come from businesses, which make contributions to non?profit scholarship or educational improvement organizations. Since the program’s inception in 2001, more than 3,600 companies have pledged nearly $490 million to EITC organizations.

The program benefits both public and private schools in Pennsylvania, and actually saves the state money – each student attending private schools saves the state approximately $12,000 per student in education costs. If all 44,000 students receiving EITC scholarships would re?enter the public school system, it would cost Pennsylvania taxpayers an additional $531.6 million per year. The EITC Program has received bipartisan support since its inception.