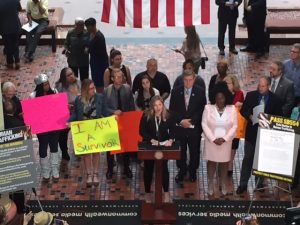 A group of lawmakers are rallying for a change that will lead to a better life for human trafficking victims. Senator Stewart Greenleaf (R – Bucks, Montgomery) spearheaded the call to action for the House of Representatives to pass his legislation, Senate Bill 554 which would provide specialized services to victims of sex trafficking under the age of 18 instead of facing charges in the juvenile justice system.

“The pain expressed by these tender souls is devastating,” Mary Bair, Director of Women’s and Children’s Services at Gaudenzia, Inc., said about her work with young women who escaped the sex trafficking trade. She said the Safe Harbor Act legislation would help “restore the dignity and autonomy” of these victims.

SB 554 would establish a statewide protocol to provide local services including safe and stable housing, access to education, employment and life-skills training, counseling, treatment for addictions, health care, and more. Rather than facing delinquency charges for prostitution, these children will get the help and support necessary to break free from enslavement.

“Thousands of children are coerced into sexual servitude each year, and have been charged with crimes such as prostitution and drug trafficking,” said Senator Greenleaf.  “The Safe Harbor bill would divert exploited children from the criminal justice system, and recognize them as victims of human trafficking, not criminals.  There is no such thing as a child prostitute—they are children, not legally capable of such consent. Now is the time to prevent the child victims of this heinous crime from gaining a criminal record and being unjustly punishment while the real criminals go free.”

The Pennsylvania Senate unanimously passed the legislation in April 2017. Prior to the rally, the House Judiciary Committee approved SB 554 clearing the next legislative hurdle.  The bill will now be considered by the full House.  Senator Greenleaf thanked Representative Ron Marsico (R – Dauphin), chairman of the House Judiciary Committee, for his leadership in moving the bill forward.

The Democratic chair of the committee, Representative Joe Petrarca (D – Armstrong, Indiana, Westmoreland), offered an amendment to strengthen the bill’s impact and lent his voice to the rally. “Human trafficking does not skip over Pennsylvania,” he said. “It is time we treat children as children.” Rep. Petrarca joined Sen. Greenleaf and many other state Senators and Representatives in urging their House colleagues to pass SB 554.

As Catholics, we vehemently oppose human trafficking and modern-day slavery as it contravenes basic human dignity. In addition to working to eradicate human trafficking, our nation should ensure that victims have the services and support they need to heal.

Join the rallying cry to create a better life for sex trafficking victims in Pennsylvania and urge your state Representative to vote YES on SB 554.