Keeping the “Catholic” in Catholic Healthcare 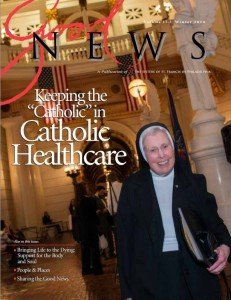 Sr. Clare Christi Schiefer, O.S.F., president of the Pennsylvania Catholic Health Association (PCHA), was recently profiled in Good News Magazine, a publication of the Sisters of St. Francis of Philadelphia.

In the interview, Sr. Clare Christi said, “Simply put, I advocate for and speak out in defense of the sanctity of life and justice in healthcare—in particular for the needs of children, the elderly, the poor, and the underserved…I support Catholic healthcare in living out its unique mission and maintaining the Catholic identity.”

In explaining the work of the PCHA, the article continues, “During Sister Clare’s tenure, PCHA has been involved in numerous healthcare debates and legislative changes. Among those topics, Sister Clare considers legislation to address end-of-life-issues, conscience protections, the effort to retain tax exempt status for charitable institutions, and the channeling of tobacco settlement money to healthcare initiatives as some of the organization’s greatest successes. She also is proud of work on the state’s Children’s Health Insurance Program (CHIP). Pennsylvania was a forerunner in the adoption of the program that provides healthcare insurance coverage and access to services for children and the Pennsylvania program was used as a model for the federal system.”

The entire article can be read here.