In Memory of Cardinal Anthony Bevilaqua 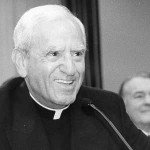 Cardinal Anthony Bevilaqua testifying in support of a death penalty moratorium in 2000.

The Pennsylvania Catholic Conference (PCC) bids farewell today to former Archbishop of Philadelphia, Cardinal Anthony Bevilaqua, who died last week at the age of 88. The Solemn Funeral Mass for Cardinal Bevilacqua is scheduled to take place at 2:00 p.m. today, Tuesday, February 7, at the Cathedral Basilica of Saints Peter and Paul.

As Chairman of the PCC Board of Governors, Cardinal Bevilaqua presided over a number of important legislative victories for the Catholic Conference. The Institutions of Purely Public Charity Act passed in 1997, defining what constitutes a charitable purpose in recognition of tax-exempt status. Also in 1997, the legislature passed the Crimes Against the Unborn Child Act, imposing criminal charges for two victims if the unborn child of a pregnant woman is harmed in the commission of a crime against his or her mother, an important pro-life victory. The Educational Improvement Tax Credit (EITC) program became law in 2001, giving scholarships to tens of thousands of students and affording them the opportunity to attend a Catholic school or another non-public school of their choice; and the Religious Freedom Protection Act passed in 2002. The RFPA law applies the “compelling state interest” standard to actions by the Pennsylvania government that place a burden on religious liberty.

In 2000, Cardinal Bevilaqua took a bold stand against capital punishment by testifying himself in support of bill that would have declared a moratorium on the death penalty in Pennsylvania.

PCN is a nonprofit, noncommercial news organization created and supported by cable television companies. PCN receives no state or federal funding. Network programming is distributed on more than 150 cable systems in Pennsylvania serving more than 10 million Pennsylvanians in 3.3 million homes. A complete listing of PCN affiliates and network channel designations is available by visiting PCN’s website at www.pcntv.com.