Improvements to the EITC and OSTC Programs

by Blue
EITC, House Bill 91, OSTC
Comments are off

This year, the PCC advocated for improvements to the popular Education Improvement Tax Credits and the Opportunity Scholarship Tax Credit programs.

“The Pennsylvania legislature has heard from the business owners and schools who are working to give parents choices in education. This legislation addresses many of the issues raised by those who utilize the program for the betterment of thousands of children across the Commonwealth,” said Sean McAleer, Director of the Education Department of the Pennsylvania Catholic Conference. 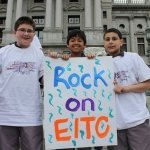 Students support EITC at a rally in Harrisburg, PA.

While EITC/OSTC programs were level-funded in the 2014-2015 state budget, several changes were made: a business may now elect to apply for an alternate credit should its preferred credit be unavailable; after January 1st of each fiscal year, the department will be permitted to transfer unused credits from one program to another; large partnerships and LLC’s will be able to create smaller subsidiary partnerships whose members can then participate in the EITC and OSTC programs.

The REACH Foundation has provided an in depth explanation of this legislation, House Bill 91, and the changes made to the EITC and OSTC programs.